Mikhail Sergachev tied it early in the third period, Vasilevskiy was perfect after allowing the 733rd goal of Alex Ovechkin’s career and Stamkos scored with 14.2 seconds left in the 3-on-3 overtime.

Vasilevskiy allowed only Ovechkin’s goal late in the second period with his countryman using Norris Trophy finalist Victor Hedman as a screen. Vasilevskiy stopped Ovechkin several times in the third, including one save with the thinnest part of his stick.

Ovechkin has three goals in two games since turning 36 and starting a five-year contract to chase Wayne Gretzky’s record of 894. Ovechkin ranks fifth and is eight back of Brett Hull for fourth.

MONTREAL (AP) — Alexis Lafreniere snapped a third-period tie with a power-play goal in his first NHL game back home, and New York beat Montreal for its first victory under new coach Gerard Gallant.

New York broke the ice in the second period on its fourth power-play opportunity. Lafreniere’s shot deflected off Chris Kreider, then Alexander Romanov, before sliding across the goal line. Kreider was credited with the goal, his third of the season.

Kevin Rooney rounded out the scoring with an empty-net goal for New York.

TORONTO (AP) — Alexander Kerfoot had a goal and an assist, Michael Bunting scored his first for his hometown team and Toronto beat Ottawa.

SAN JOSE, Calif. (AP) — Jasper Weatherby scored the tying goal in his NHL debut and William Eklund set up the go-ahead score in his first career game to lead San Jose past Winnipeg.

Adin Hill made 20 saves in his debut with the Sharks.

BOSTON (AP) — Brad Marchand scored twice, Jake DeBrusk broke a 1-all tie early in the third period and Boston opened the season with a win over Dallas.

Nick Foligno, Erik Haula and David Pastrnak each had assists, and Jeremy Swayman stopped 27 shots for the Bruins, who never trailed.

Luke Glendening scored for Dallas and Braden Holtby kept the Stars close with 37 saves. Boston had the first nine shots of the game and finished with a 40-28 advantage.

PITTSBURGH (AP) — Drew O’Connor scored his first NHL goal, Danton Heinen got his third in three games and Pittsburgh scored four times in the first period in a win over Chicago.

Patrick Kane scored on the power play and Kirby Dach added a goal for the Blackhawks. Marc-Andre Fleury started against his former team, allowed four goals on 10 shots, and lasted less than 12 minutes. Kevin Lankinen stopped 15 shots in relief.

Justin Faulk had a goal and an assist, while Brayden Schenn also scored for the Blues. Ryan O’Reilly sealed it with an empty-net goal with 20 seconds remaining.

Colorado trailed 4-1 when Tyson Jost scored at 14:36 of the third and J.T. Compher made it a one-goal game at 16:18. The Avalanche appeared to tie it with 2:49 left but a replay review determined it was scored with a kicking motion.

COLUMBUS, Ohio (AP) — Patrick Laine scored at 2:16 of overtime to give Columbus a come-from-behind win over Seattle.

Eric Robinson scored, and Elvis Merzlikins stopped 19 shots for his second win for the Blue Jackets, who are off to a 2-0-0 start.

Jonathan Huberdeau got the 500th point of his career for Florida. Anthony Duclair and Aleksander Barkov added goals for the Panthers.

Oliver Wahlstrom scored a power-play goal for the Islanders. Ilya Sorokin stopped 24 shots for the Islanders, who failed to get a point out of their first two games for only the second time in the last 15 years. It also happened in 2016-17.

DETROIT (AP) — Thomas Greiss made 40 saves and Detroit made an early lead stand up in a win over Vancouver.

Robby Fabbri and Filip Zadina scored for Detroit, which also got an empty-net goal from Sam Gagner with 58 seconds remaining to provide a two-goal cushion.

Jesper Fast also scored, and Frederik Andersen made 38 saves for Carolina, which has won its first two games.

Ryan Johansen and Filip Forsberg scored for the Predators, losers of their first two games. Juuse Saros finished with 29 saves.

Cody Eakin scored in the second period for the Sabres, and Dustin Tokarski made 20 saves before stopping two of three shots in the tiebreaker.

LOS ANGELES (AP) — Frederick Gaudreau, Victor Rask and Ryan Hartman scored in the second period and Minnesota held on for a win over Los Angeles.

Cam Talbot started for the second straight night and made 29 saves. He stopped 57 of 60 shots to win back-to-back games against Anaheim and Los Angeles.

Anze Kopitar had a goal and an assist, Viktor Arvidsson scored his first goal for the Kings, and Jonathan Quick made 27 saves.

Mike Smith made 45 saves, and Jesse Juljujarvi had a goal and two assists for the Oilers (2-0). Derek Ryan also scored, and Leon Draisaitl added three assists.

Andrew Mangiapane and Elias Lindholm scored for the Flames, who have lost a record 12 straight season openers. 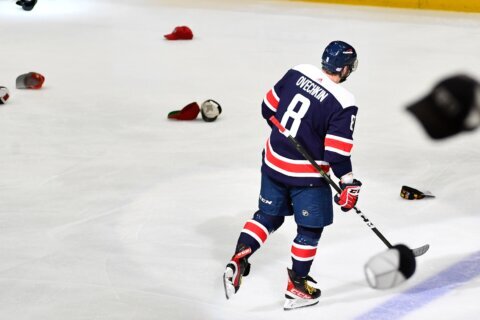 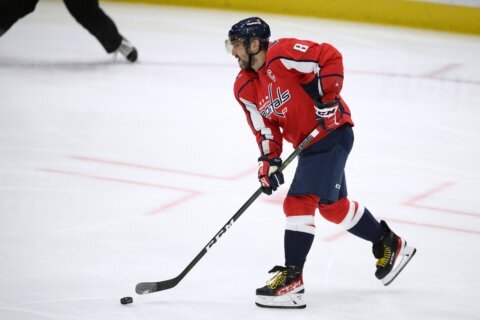