Raffl was acquired at the trade deadline from the Philadelphia Flyers, but an upper-body injury he suffered while still with the Flyers has kept him from playing or practicing with his new team.
Listen now to WTOP News WTOP.com | Alexa | Google Home | WTOP App | 103.5 FM

Forward Michael Raffl skated with the Capitals for the first time on Tuesday, participating in practice in a light-blue non-contact jersey.

Raffl was acquired at the trade deadline from the Philadelphia Flyers, but an upper-body injury he suffered while still with the Flyers has kept him from playing or practicing with his new team.

Raffl’s participation on Tuesday is a step in the right direction, but it is still too soon to tell when he could make his Capitals debut.

“I’ve got to talk to the doctors first, to be honest,” Raffl said. “It was very nice to get out there and practice with the boys and there’s another practice day tomorrow, see how things progress and take the best approach possible so I can stay healthy for hopefully a long playoff run.”

Raffl has spent his entire eight-year NHL career with the Flyers, but said he was not surprised by the team’s decision to trade him at the deadline.

“I’ve been in this league long enough to know when things might happen,” Raffl said. “I didn’t really have an idea of what’s going down, but that’s part of the business. You’ve got to be ready for everything.”

Though he is a depth player, Raffl had an impressive postseason in 2020 with four goals and one assist in just nine games.

“Responsible in our end, power forward, get some grit going, puck possession and be tough to play against,” Raffl said.

He added, “You need different skillsets on a winning team, I think. Everybody has to do their part and some jobs are not as much fun as others, but they need to be done.”

Raffl also provides some depth at center, though he said Tuesday that he would prefer to play wing. Still, it is a position he is comfortable with if necessary.

Center depth was revealed to be an area of need for Washington in the 2020 postseason when Nicklas Backstrom was injured in Game 1 against the New York Islanders and the team struggled to replace him in the lineup.

Regardless of where he lines up, however, Raffl is focused on having a positive impact for his new team on what he hopes will be a long playoff run.

“I’m very excited to be here,” he said. “I’m going to give it my everything and chip in one way or the other.” 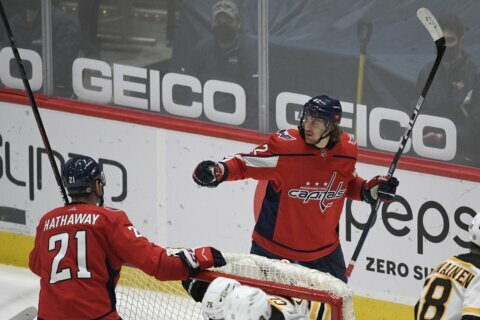