UNIONDALE, N.Y. (AP) — Evgeny Kuznetsov wasn’t sure if he was going to get a chance in the shootout. When he did, he took advantage and sent the Washington Capitals back into sole possession of first place in the East Division.

Kuznetsov scored the deciding goal of the tiebreaker, giving the Capitals a 1-0 win over the New York Islanders on Thursday night.

“The shootout is a lottery,” Kuznetsov said. “I wonder if I get in, and then I got an open corner.”

Ilya Samsonov stopped 26 shots through overtime for his second shutout of the season and third of his career. Washington won for the seventh time in 11 games, beating the Islanders for the fourth time in six meetings this season.

“He came up huge,” Washington defenseman John Carlson said of Samsonov. “They weren’t just good saves, they were great saves every time they did break through us. That was the difference.”

Semyon Varlamov, who had a 29-save shutout in the teams’ last meeting on April 6, finished with 28 saves through overtime in this one for his fifth shutout of the season. However, he gave up two goals on three attempts in the shootout.

The Islanders fell one point behind the Capitals, tied for second place with Pittsburgh — which beat New Jersey 5-1. Boston is another three points back in fourth.

“Both teams played really well tonight,” New York’s Anthony Beauvillier said. “There was not a lot of space and obviously Varly was really good. Unfortunately, we couldn’t get the win for him.”

After Beauvilier beat Samsonov with a backhand in the second round of the tiebreaker, Nicklas Backstrom scored off the crossbar and in to tie it. Brock Nelson misfired on the Islanders’ attempt in the third round before Kuznetsov beat Varlamov on the stickside to give the Capitals the win.

“I think we had a tough first period, but the other 40 minutes we absolutely dominated them,” Kuznetsov said. “We got so many chances, I think that’s how we have to play. I give them credit, they defend well. Both goalies — they play unbelievable, that’s a good rivalry.”

The Islanders controlled the puck for most of the extra period, with each team managing one shot on goal. The Capitals also had a shot by Lars Eller go wide.

The teams meet again Saturday back at the Nassau Coliseum and Tuesday in Washington.

After a Capitals turnover late in the third, Mathew Barzal skated in, got around Dmitry Orlov and skated in on Samsonov but lifted a forehand shot over the goal with 4:15 left.

Varlamov made a save off the shaft of his stick on a shot by Orlov about 2 minutes later. T.J. Oshie had two tries in close from the right side with 1:30 left, but couldn’t get anything past the Islanders’ goalie.

The Islanders outshot the Capitals 15-4 in a fast-paced and physical first period. Barzal had the Islanders’ best scoring chance as he skated in alone on Samsonov on a breakaway, but was denied by the Capitals’ goalie.

Capitals star forward Alex Ovechkin left the ice with just under 3 minutes remaining in the third period and didn’t get back on the ice the rest of regulation or the overtime. He also didn’t take an attempt in the shootout. Laviolette didn’t provide any information on Ovechkin’s status, only saying he was unavailable.

The Capitals came in with the league’s top power play at 27.6%, converting 10 for 23 over their last five games. However, they went 0 for 3 against against an Islanders penalty-kill that was 10th at 82.5%, New York has allowed only one goal on their opponents’ last 24 power plays over the last 10 games.

Cal Clutterbuck returned to the Islanders’ fourth line with Casey Cizikas and Matt Martin after missing the last three games. Leo Komarov stayed in and moved up to the top line with Barzal and Jordan Eberle. Travis Zajac was scratched.

Veteran defenseman Zdeno Chara returned to the Capitals’ lineup after missing Sunday’s 6-3 loss at Boston. Chara played in his 1,599th career game. Justin Schultz, out with a lower-body injury sustained early in Sunday’s game, did not accompany the team to New York. He is also expected to miss Saturday’s game against the Islanders. LW Michael Raffl, acquired from Philadelphia at the trade deadline, made his Capitals debut.

THREE IN A ROW

The Capitals are playing the same team in three straight games for fourth time in franchise history, and first time in 15 years. They lost all three vs. Tampa Bay in February 1998, won two out of three vs Atlanta in January 2000 and went 0-1-2 vs. Carolina in April 2006. 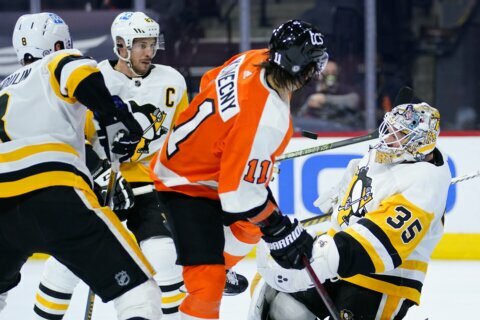 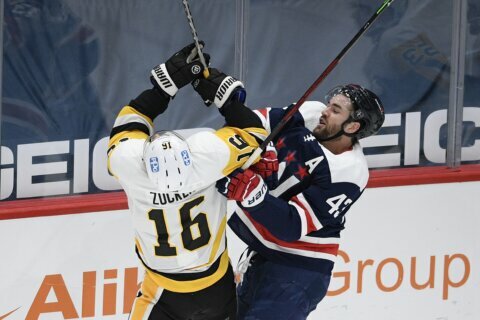 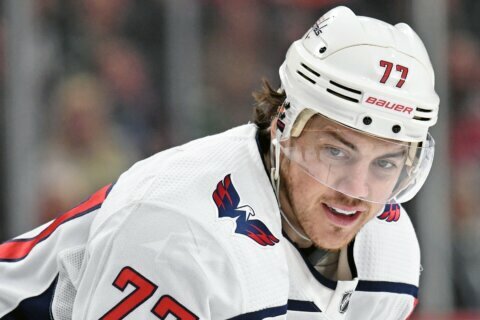