Alex Ovechkin is day-to-day with a lower-body injury, according to the Capitals. The Caps will play the Islanders again on Saturday and we should have a better idea as to Ovechkin's status from Saturday's morning skate.
Listen now to WTOP News WTOP.com | Alexa | Google Home | WTOP App | 103.5 FM

Alex Ovechkin is day-to-day with a lower-body injury, according to the Capitals.

In Thursday’s win over the New York Islanders, Ovechkin did not play the final 2:49 of regulation or any shifts in overtime, though he did not leave the bench. Following the game, Laviolette said he was not sure what was wrong, but just that Ovechkin was not available.

The Caps will play the Islanders again on Saturday and we should have a better idea as to Ovechkin’s status from Saturday’s morning skate. If he does not play, this will most likely mean Daniel Sprong will get back into the lineup. He was a healthy scratch Thursday as Michael Raffl came in to make his Capitals debut.

Ovechkin has scored 24 goals in 43 games this season and sits just one goal away from tying Marcel Dionne for fifth all-time.

Veteran goalies getting their shot in Stanley Cup playoffs 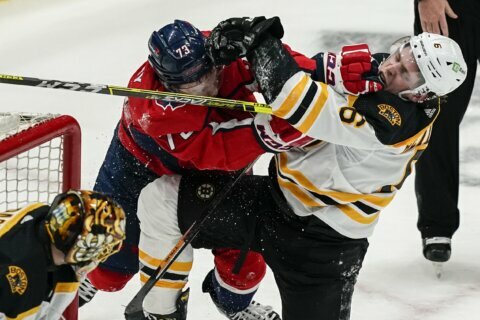