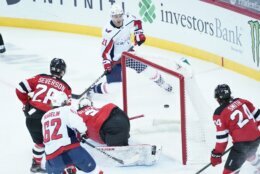 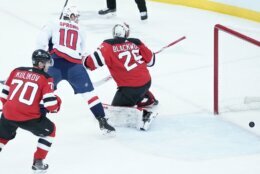 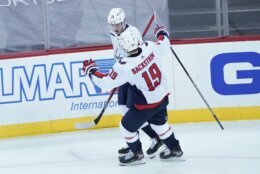 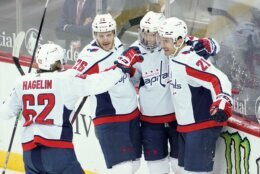 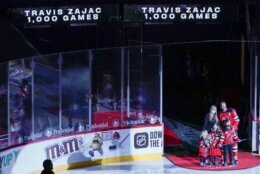 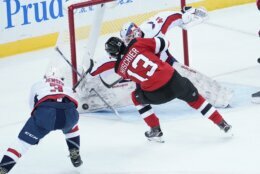 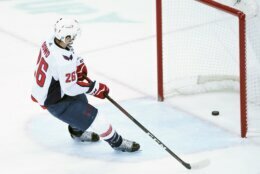 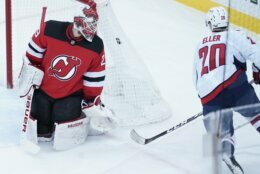 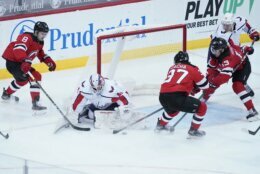 NEWARK, N.J. (AP) — Based on recent results, the Washington Capitals are getting used to coach Peter Laviolette’s new system.

They are even winning games when Nicklas Backstrom and Alexander Ovechkin don’t contribute a point.

Garnet Hathaway and Daniel Sprong scored in the opening 5:06 and the streaking Capitals opened an early three-goal lead and held off a rally by the slumping New Jersey Devils in a 5-2 win on Saturday.

Lars Eller, who added the third goal in a big opening period, thinks Washington is hitting its stride in a 5-1-1 run that followed a four-game losing streak.

“I think Pittsburgh (Thursday) was maybe our best game of the season and today we finally came out with a really good start, we were on our toes, all four lines were going,” Eller said. “I’m encouraged by what I’ve seen here lately, but especially the last two games more so maybe, and then the last five, seven or so.”

Jabub Vrana scored on a third-period breakaway and Nic Dowd added an empty net tally as the Capitals kept New Jersey at bay after it got within a goal of the lead. Rookie Vitek Vanecek had 22 saves in his ninth win.

“We weren’t ready to play,” Ruff said. “We weren’t ready to compete. We turned a lot of pucks over and looked like we wanted to be a little bit of a fancy team, because our wall battles weren’t great to start the game. I thought the last 40, that’s the team I like to see. But totally unacceptable in the first 20.”

The Capitals, who rallied from a two-goal deficit to beat New Jersey last Sunday, learned from that game and started fast.

Hathaway opened the scoring at 3:36, depositing a nice cross-ice pass by defenseman Justin Schultz into a wide-open net.

Sprong, who only got a chance to play because Evgeny Kuznetsov was out with an upper-body injury, deflected a point shot by Brenden Dillion past Blackwood at 5:06.

Eller scored in his second straight game, capping a 3-on-1 break. Conor Sheary used Alex Ovechkin as a decoy on the rush to set up the Dane’s fourth goal of the season.

Hathaway said the success comes from players understanding the system.

“When guys aren’t wasting time or energy or thinking too much, that’s when we anticipate the play and then you see that work ethic take over in a battle, beating guys to the puck. I think that’s what creates our offense a lot too.”

Hischier, who left the ice with 4:23 to play after being hit in the shield by a deflected power-play shot, got New Jersey back in the game in the final minutes of the first period, scoring from in close.

Zacha extended his scoring streak to nine games with a goal from between the circles in the second period with Vanecek playing without his stick.

Ruff said he spoke briefly with a bloodied Hischier but added he has not seen a replay of the incident.

“I believe it hit the shield and pushed the shield into his face so that that actually is a good thing,” Ruff said. “But we don’t know the results of it. It hit him hard, hit him really hard, but it hit him it seems like in the shield or on top of the helmet.”

Vanecek, playing in his 16th game, made at least three good saves early in the third period to keep Washington ahead. Vrana iced the game by beating Blackwood between the pads on his breakaway.

“I think we’re definitely not satisfied still,” Caps D John Carlson said. “I think it’s been better, I would say, but you can’t kind of say you’re there after six games. So we still have a lot to learn, a lot to clean up and a lot we can improve on. I think we’re confident in our team, but we’ve got a long ways to go.”

NOTES: The Devils presented C Travis Zajac a silver stick before the game for playing his 1,000th game last weekend. …. New Jersey reassigned D Connor Carrick from the taxi squad to Binghamton (AHL) and recalled D Matt Tennyson from Binghamton to the taxi squad. … Carlsson picked up two assists and is now three shy of 500 points. Backstrom remains one assist shy of 700.

UP NEXT: The teams are back at the Prudential Center for a 3 p.m. game on Sunday. 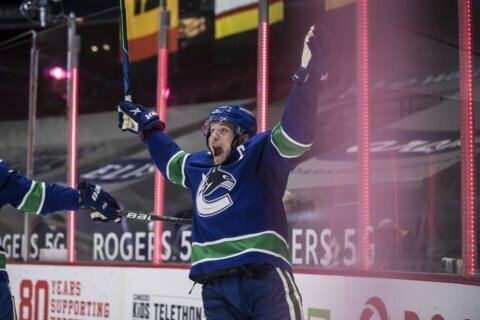 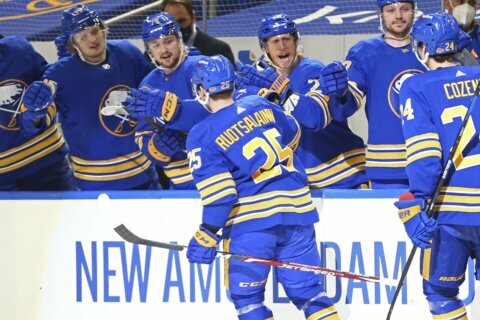 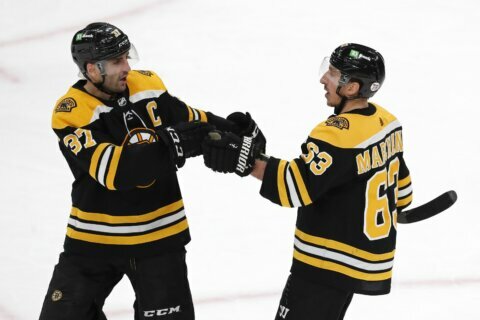