Buoyed by their top scorer’s first two goals of the season and a big rookie’s fight against one of the toughest players in hockey, the Bruins erased a three-goal deficit to beat the Washington Capitals 5-3 on Monday night.

“(Frederic) had a great fight and gave huge energy to our bench, and it was unbelievable,” Pastrnak said. “On the scoring, obviously it felt great. Had a little trouble, I was missing the net a lot, so obviously it was a good one that finally hit the net.”

Boston rallied from a 3-0 deficit for the second game in a row against Washington. After losing Saturday on Alex Ovechkin’s overtime goal, the Bruins came all the way back this time.

Pastrnak scored twice before Frederic dropped the gloves with Wilson in the third period for a knock-down, drag-out tussle that shifted momentum. He watched from the penalty box as Craig Smith tied it, and then defenseman Brandon Carlo scored the go-ahead goal with 3:27 left.

“In the box, I was like a little kid in there just jumping around when we scored,” Frederic said. “I felt like just a huge Bruins fan sitting in that bench. I had great glass seats for five minutes.”

The Capitals had front-row seats for Pastrnak’s breakout performance in his second game after undergoing offseason hip surgery. It only took a few periods for the rust to be gone.

“We’re happy to have him in the lineup,” coach Bruce Cassidy said. “He’s a threat every time he’s on the ice. He just looks stronger on pucks, and that’s just the physical maturity coming through. Nice weapon to have back in your mix.”

Washington lost in regulation for the first time this season, ending its franchise-best point streak to start a season at nine games. The Capitals lost another regular to injury when winger Conor Sheary limped off late in the third period.

“I think we’ve got to take a look at some things,” said coach Peter Laviolette, who didn’t have an update on Sheary. “I would rather stay on the attack. We talked about it going into the third period and I don’t think that we did that.”

The Florida Panthers, who have played only six games this season, are the league’s last unbeaten team in regulation.

Former Bruins captain Zdeno Chara scored in his second game against his old team. Chara and Daniel Sprong combined for two goals in 11 seconds, John Carlson scored on the power play and Jakub Vrana had two primary assists after being demoted to the fourth line.

“Basically tonight didn’t work out our way,” Vrana said. “But you have to turn the page and learn the mistakes and (start) focusing on the next game ahead of us. Just keep rolling here and trying to get back on a winning track.”

Boston was still able to fight back for the second three-goal comeback against Washington in franchise history. Cassidy and players credited Frederic for sparking it all.

“He did a fantastic job,” Carlo said. “To go up against that guy’s not an easy task, and Freddie’s just fearless in that regard. He really got that whole thing jump-started with the comeback and I think he’s a big part of the reason we won.”

While defenseman Dmitry Orlov returned from a five-game pandemic protocol absence, Washington was without goaltender Ilya Samsonov and center Evgeny Kuznetsov for a sixth consecutive game. They did not skate with the team and remained on the NHL’s COVID-19 unavailable list.

Coach Peter Laviolette said Kuznetsov and Samsonov are still in quarantine. Center Lars Eller missed his third in a row with an upper-body injury and defenseman Justin Schultz his second after taking a puck to the face Thursday.

“I saw Schultz at the rink, and I talked to him,” Laviolette said. “He’s doing good. He remains day to day. … I think there’ll be a process to it. You guys will probably see it as it starts to unfold on the ice.”

Bruins: Travel to Philadelphia for games against the Flyers on Wednesday and Friday. 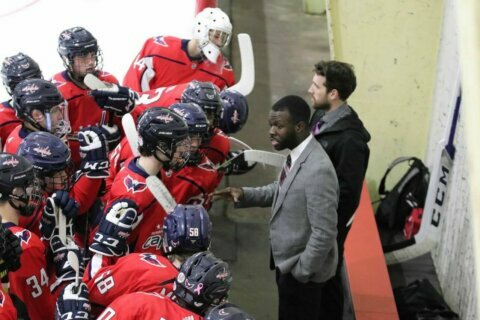 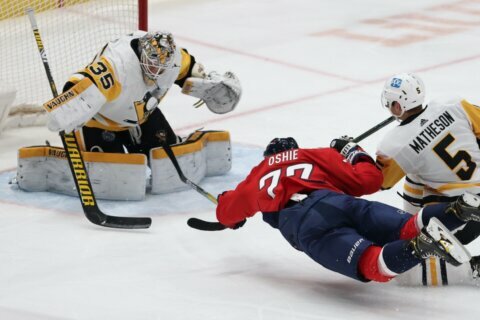