Home » Washington Capitals » How will the Capitals…

How will the Capitals fill the void without Oshie?

Among the Capitals' strengths during their Stanley Cup run last spring was their ability to handle adversity. We're about to find out if the 2019 Capitals can do the same.
Listen now to WTOP News WTOP.com | Alexa | Google Home | WTOP App | 103.5 FM

Among the Washington Capitals’ strengths during their Stanley Cup run last spring was their ability to handle adversity.

We’re about to find out if the 2019 Capitals can do the same.

Fresh off dropping Games 3 and 4 in Carolina this week, the Capitals limp home with a series they once controlled suddenly even at two games apiece. Momentum is squarely on the Hurricanes’ side with the upstarts proving they can hang with the defending champs.

Making matters worse for the Capitals: They must soldier on without forward T.J. Oshie, who is out indefinitely with an upper-body injury.

“We’ll rely on our veteran group, as we have all year, to push us through and find the right combinations that give us a chance to win Game 5 here at home,” said head coach Todd Reirden.

Oshie was injured late in Game 4 after taking a hit from Carolina’s Warren Foegele and landing awkwardly into the boards. Oshie ranked second on the team during the regular season with 25 goals and finished with 54 points in 69 games.

Teammate Tom Wilson described Oshie as a “heart and soul guy,” while Reirden called him “one of the top leaders in the entire league.”

“You can go on a lot of different ways with the type of person that T.J. Oshie is and not having him around your players is not great,” Reirden said. “That loss will be felt.”

Reirden is hopeful that the Capitals can draw on their experience from last spring when they eliminated the Pittsburgh Penguins in Round 2 despite playing without injured forwards Nicklas Backstrom and Andre Burakovsky as well as the suspended Tom Wilson.

“We had other players step up,” he said. “This is part of playoff hockey. There’s a void there, for sure. I’m not going to downplay that. And to me it’s up to who steps up and takes advantage of that opportunity. We need more from all of our players to begin with, but especially now given this situation. He’ll be sorely missed.”

download audio
TODD REIRDEN ON THE LOSS OF T.J. OSHIE

When Oshie missed time during the regular season, Brett Connolly and Andre Burakovsky were among those who moved up the depth chart and saw time in the Capitals’ top six. Both are candidates to move up the depth chart with Oshie out again. Carl Hagelin could also be moved to Washington’s second line.

Regardless of who gets elevated for Game 5, it will take a committee to help fill the void, should the Capitals make another deep postseason.

As Reirden noted, the urgency rises with Oshie out, but the Capitals have been searching for more production from many of their forwards for much of the series.

Connolly, Burakovsky, Hagelin and Jakub Vrana are all searching for their first point of the playoffs. Lars Eller has been limited to an empty-net goal, while last year’s postseason scoring leader, Evgeny Kuznetsov, has been held without a goal through four games.

“We’ve got to find ways to generate offense,” Reirden said. “It’s always tougher to create in the playoffs. You know, teams don’t give up quite as much on the rush. They’re a lot more committed to not giving up odd-man rushes to the opposition. We’ve got to find a way to get in on the forecheck more and impose a little bit more of a physical style of play on their defense.”

Smith-Pelly to play in Game 5

The Oshie injury opened the door for the Capitals to recall a forward from the AHL’s Hershey Bears. The need for a better forecheck and more physicality made Devante Smith-Pelly an ideal fit.

Smith-Pelly developed into a fan favorite last spring as he scored seven goals in the playoffs, including goals in three consecutive games in the Stanley Cup Final. But inconsistent play during the 2018-19 season, including a 30-game goalless drought, led to his assignment to AHL Hershey in February. Smith-Pelly had six goals and 14 points in 20 games in the minors, before being recalled by the Capitals on Friday.

Reirden confirmed that Smith-Pelly will be in the lineup in Game 5. In addition to the physical element he brings, Smith-Pelly isn’t afraid to get into shooting lanes to block shots. The Hurricanes are a high-shot volume team.

“He pays the price that way,” Reirden said. “And when things get more difficult, he seems to relish in that and step up to the plate and obviously delivered some big goals for us [last year]. Those are some things we’re looking for. Obviously it’s been a little while since he’s played at this level, so we’ll ease him into it. But that being said, we need his impact and we’re going to need four lines of impact and six defensemen to be able to come up with Game 5 here.”

— Jakub Vrana on the Capitals having to pick up the slack without injured forward T.J. Oshie.

Down on the farm

The Hershey Bears fell to the Bridgeport Sound Tigers 3-2 in double overtime in Game 1 of their first-round series in the AHL’s Calder Cup Playoffs. New York Islanders prospect Kieffer Bellows had two goals, including the game-winner at 13:36 of the second overtime. Capitals goaltending prospect Ilya Samsonov made 49 saves in his AHL postseason debut.

The Capitals host the Hurricanes in Game 5 Saturday at 8 p.m. Catch the call on 1500AM and on CapsRadio24/7. 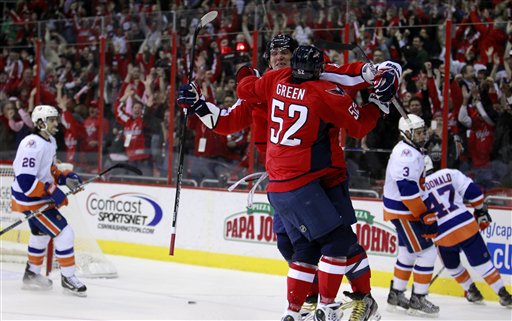 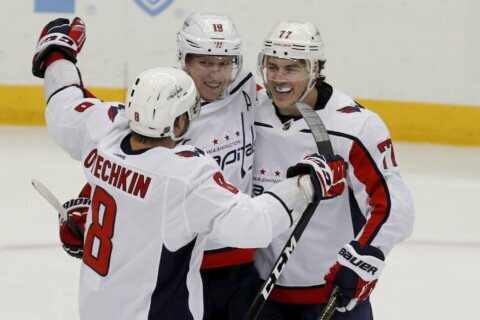