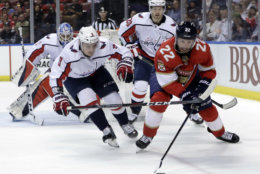 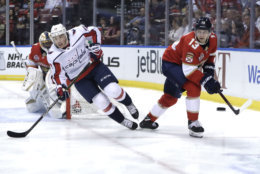 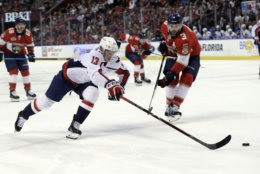 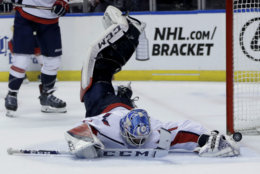 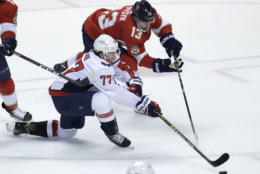 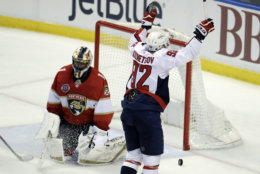 With a chance to clinch the Metropolitan Division, the Capitals faced off against a Panthers team that took them to overtime twice and won both games.

The Panthers swept the season series with a 5-3 win against the Caps in Sunrise, Florida Monday night.

The Panthers took the lead with six minutes remaining in the first period. Colton Sceviour kicked the puck to Frank Vatrano for his 24th goal of the season, a new career high.

The Caps put pressure on the Panthers in the opening five minutes of the second period. But off a faceoff loss in their own zone, Matt Niskanen accidentally batted the puck to the slot, and Jonathan Huberdeau ripped a shot past Phoenix Copley.

Vatrano was called for holding the stick, but the ensuing Caps power play helped the Panthers more. Aleksander Barkov stole the puck from John Carlson at the blue line and Vincent Trocheck beat the Caps defenders down the ice to score his ninth goal of the season.

Former Cap Troy Brouwer extended his goal-scoring streak to three games after Barkov pulled Copley outside of his crease and fed the puck across. Barkov’s second assist gave him his 93 point, the second most single-season points for a Panther in a season. Pavel Bure holds the lead with 94.

Evgeny Kuznetsov finally put the Caps on the board with nine minutes remaining when a John Carlson point shot ramped up his stick. The goal is Kuznetsov’s fourth on the road this season.

The Caps’ late push continued when Nicklas Backstrom fired a one-timer past Roberto Luongo for his 22nd goal of the season.

With Copley pulled and just over two minutes remaining, Jakub Vrana converted on a TJ Oshie pass to bring the Caps within one.

But despite the furious comeback, Trocheck iced the game with an empty-net goal, his 11th multi-goal game of his career.