Caps fans rocked the red on Saturday at Fanfest for a picture with the Stanley Cup and a chance to get a peek at the team's development camp scrimmage at Kettler Capitals Iceplex in Arlington, Virginia. But some fans said they were turned away from the event even as they stood in line for hours.
Listen now to WTOP News WTOP.com | Alexa | Google Home | WTOP App | 103.5 FM
(1/6) 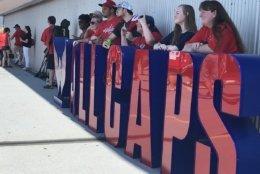 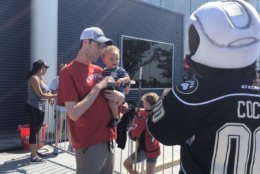 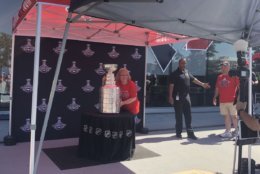 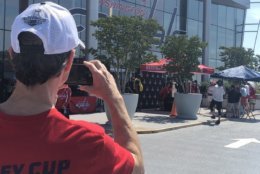 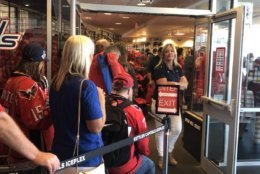 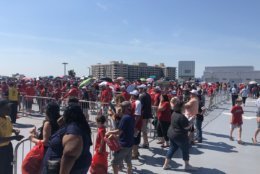 WASHINGTON — Caps fans rocked the red on Saturday at Fanfest for a picture with the Stanley Cup and a chance to get a peek at the team’s development camp scrimmage.

The event, which included a team equipment sale, took place at the Kettler Capitals Iceplex in Arlington, Virginia.

Despite the blazing sun, fans stood in line for hours for a photo opportunity with the cup.

Would you stand in this line for the perfect pic with the #stanleycup? 🤔😏 @WTOP pic.twitter.com/RxQD7oyAyP

“We’ve waited our whole lives for it,” said Laura Witherspoon.

One of the biggest fans at the event was Zachary Devinger, who came with his mom. He’s a part of the Washington Capitals’ youth hockey team for players ages 8 and under.

“It feels like the real Stanley Cup in the real hockey game,” Devinger said.

It wasn’t a day of dreams fulfilled for all, though. Some disappointed fans took to Twitter to share that despite waiting in line in the heat for hours, they were eventually turned away, no picture in tow.

Really disappointed by #CapsFanFest Husband rode the metro with our baby to see the #StanleyCup and was turned away rudely, told he could not join the line (before scheduled cut off) and wouldn’t get a photo anyway. Badly handled all around #heartbroken #ALLCaps #awful

There are still well over 1000 fans in line including small kids and this dog. We would like a pic with the Cup or something better than, “Try again!” And shrug of the shoulders. @Capitals just don’t care.

How about some fast passes for the next viewing opportunity for those who don’t make it? Work some magic! #CapsFanFest

The Washington Capitals addressed angry fans on Twitter, sharing a link where those who did not get a chance to snap a photo could sign up for future picture opportunities.

We appreciate your patience as we moved through as many fans as possible to take a picture with the Stanley Cup. If you were in line and did not receive a photo, please fill out the form link below and we will communicate future photo opportunities to you.https://t.co/zvjE4fSSwE