Coronavirus News: Fairfax Co. votes to increase substitute teacher pay | Is it time to get a COVID-19 booster? Which one? | Local cases of COVID-19 | How many in DC region are vaccinated?
Home » Washington Capitals » 10 fun facts about…

Lots of people 'rock the red.' Few are willing to put all pride aside and wear a bright red suit. WTOP sports guy Dave Preston is one of the few.
Listen now to WTOP News WTOP.com | Alexa | Google Home | WTOP App | 103.5 FM

WASHINGTON — Not many people can carry off a bright red suit — the Romantics could, for their first album — but WTOP sports reporter and anchor Dave Preston has no fashion fears.

On April 12, during the 6:45 p.m. sportscast, Preston vowed he would wear his red suit on air, if the Capitals won the Stanley Cup.

They did, and he did.

Preston was willing to share with me — exclusively — 10 never-before-revealed facts about his red suit. 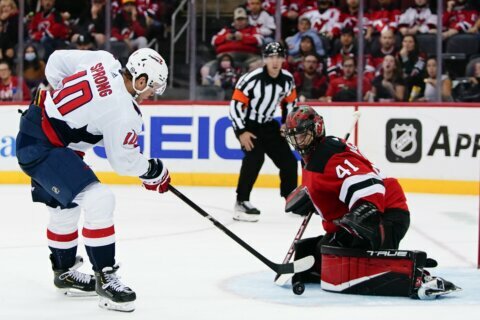