Washington Capitals forward Tom Wilson has received a three-game suspension for his hit on Pittsburgh Penguins forward Zach Aston-Reese in Game 3 of the Eastern Conference Semifinals. The Capitals lead the series 2 games to 1.

Should the Capitals eliminate Pittsburgh in five games, Wilson would miss Game 1 of the Eastern Conference Final.

No penalty was assessed after Wilson collided with Aston-Reese midway through the second period of Game 3, but Wilson had a hearing Wednesday with the NHL’s Department of Player Safety.

Soon after the Capitals beat the Penguins 4-3 in Game 3, Pittsburgh head coach Mike Sullivan revealed that Aston-Reese suffered a broken jaw and a concussion as a result of the Wilson hit.

The incident marked the second consecutive game in which a Penguins player was injured as a result of a collision with Wilson. Pittsburgh defenseman Brian Dumoulin missed the final 35 minutes of Game 2 after he was hit by both Alex Ovechkin and Wilson.

In that particular incident, Wilson made contact with Dumoulin’s head, but he was not suspended as the DOPS determined that the contact was unavoidable after Dumoulin adjusted his position at the last moment to brace for a hit from Ovechkin.

Wilson is a repeat offender, having now been suspended three times in his career. The two previous suspensions were both the result of illegal checks during preseason games last fall.

Wilson was suspended for two preseason games for interference against St. Louis Blues prospect Robert Thomas. He was later suspended for the first four games of the regular season for boarding Blues forward Sam Blais in the preseason finale.

After receiving the two suspensions last fall, Wilson met with the head of the NHL’s Department of Player Safety, George Parros, for a better understanding of how he can maintain his physical style of play within the rules.

“He always tries to work on the part of the game that still allows him to be what he is, but be in the confines of all the rules,” said head coach Barry Trotz.

Matt Niskanen has been teammates with Wilson for the last four seasons.

“He’s evolved,” Niskanen said. “He still plays a real hard game. He’s a bull in a china shop. When he gets motoring, boy, he’s a force. But, you can see he’s making a conscious effort on his hits to keep his elbows down and stay on his feet.”

“Offensively, his game has come a long way. His physical play — he’s trying to walk the line of being a real physical player but playing clean, keeping his elbows down, feet on the ice. I think he’s doing a good job. He’s playing the game the way he should and the way he needs to be a really effective player,” Niskanen said.

At 6 feet 4 inches, 220 pounds, Wilson has used his frame to his advantage throughout his career, emerging as one of the NHL’s most bruising power forwards. Since breaking into the league as a 19-year-old rookie in 2013, Wilson leads the NHL with 807 penalty minutes.

But, Wilson has also rounded out his skill set, while gradually working his way up the Capitals depth chart. That climb culminated with a spot on Washington’s No. 1 line for much of this season. Wilson, 24, had career-highs across the board in his fifth NHL campaign with 14 goals and 35 points in 78 games, while averaging 15:59 of ice-time per game.

Wilson has two goals and seven points in nine games this postseason, playing primarily with Ovechkin and Evgeny Kuznetsov. He has also been a key cog on a penalty killing unit that recently killed 24 consecutive short-handed situations.

With Wilson set to miss the next three games, the Capitals will likely turn to Travis Boyd or Shane Gersich to help fill the void.

Boyd, 24, played eight games with the Capitals during the regular season and would be making his NHL postseason debut. The Capitals’ sixth-round pick (177th overall) in the 2011 NHL Draft has played 215 career games with the AHL’s Hershey Bears and can play center or wing.

Gersich, 21, signed an entry-level deal with the Capitals in March after his junior season at the University of North Dakota. Washington’s fifth-round pick (134th overall) in the 2014 NHL Draft appeared in three games late in the regular season and showed off plenty of speed in a small sample size.

Catch Game 4 between the Capitals and Penguins on Thursday night on WFED 1500AM. Pregame coverage begins at 6:45 p.m. 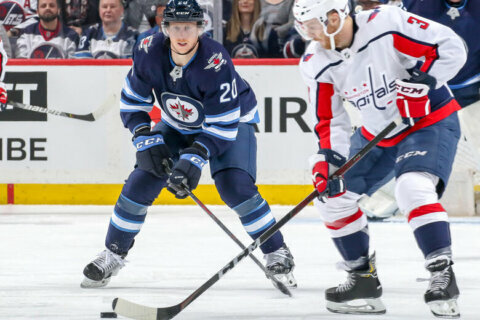