As the Capitals prepare for Game 7 of the Eastern Conference Final on Wednesday night, we take a stroll down memory lane and look back at Washington's four wins in a Game 7 setting.
download audio
HEAR JOHN WALTON'S FINAL CALL FROM THE CAPITALS GAME 6 WIN OVER TAMPA BAY

TAMPA BAY, Fla. — Perhaps it’s fitting that if the Capitals are to reach the Stanley Cup Final for the first time in 20 years, it will take a Game 7 win to get there.

When the Capitals and Tampa Bay Lightning close out the Eastern Conference Final on Wednesday (8:00 p.m.; WFED 1500AM), it will be the 11th career Game 7 for both Alex Ovechkin and Nicklas Backstrom. No two teammates have played in more Game 7s than the longtime faces of the Capitals franchise.

“[Wednesday] is probably biggest game in my life, this team, this organization,” said Ovechkin, who has three goals and six points in his 10 previous Game 7s. “We just want to be here, want to come back here to Game 7 and win the game.”

Game 7 has historically not be kind to the Capitals, who are 4-11 all-time in the winner-take-all match up, including 3-7 in the Alex Ovechkin Era.

In a season and a playoff run that has been all about handling adversity, exorcising their demons and changing the narrative, a Game 7 victory on the road seems almost perfect.

With that in mind, we present a stroll down memory lane and a look back at each of Washington’s four wins in Game 7.

In what remains one of the most memorable goals in franchise history, Dale Hunter beat Philadelphia’s Ron Hextall at 5:57 of overtime to secure a 5-4 overtime win over the Philadelphia Flyers in Game 7 in the 1988 Patrick Division Semifinals.

Hunter had two goals and an assist as the Capitals erased a 3-0 deficit and earned their first Game 7 win in franchise history. It also capped off a comeback in the series itself as the Capitals had trailed Philadelphia 3-games-to-1. The Game 7 triumph came nearly a year to the date after the Easter Epic – a quadruple OT defeat to the New York Islanders in Game 7 of the 1987 Patrick Division Semifinals.

Hall-of-Famer Sergei Fedorov spent parts of two seasons with the Capitals and produced his greatest moment in a Washington sweater in Game 7 of the Capitals’ first-round series against the New York Rangers in 2009.

With Game 7 tied 1-1 and fewer than five minutes remaining in regulation, Fedorov wired a shot past Henrik Lundqvist for the eventual game-winning goal as the Capitals beat the Rangers 2-1. Fedorov’s goal secured the first playoff series win in the Alex Ovechkin Era, as Washington once again rallied from a 3-1 series deficit.

The Capitals are 1-3 all-time on the road in Game 7 with the lone triumph coming against the defending Stanley Cup champion Boston Bruins in 2012.

With Dale Hunter serving as the Capitals head coach in 2012, Joel Ward joined Hunter as the only players in team history to score an OT game-winner in a Game 7. Ward beat Boston’s Tim Thomas at 2:57 of OT, while rookie goaltender Braden Holtby made 31 saves in the Washington win.

Ward’s game-winning goal was the culmination of a terrific series that saw all seven games decided by one goal for the first time in NHL history. Four of the seven games were decided beyond regulation.

Evgeny Kuznetsov’s series-clinching OT winner against the Pittsburgh Penguins earlier this month may be the biggest goal of his career, but don’t try telling him.

“You may say that,” Kuznetsov said after the Capitals eliminated the Penguins, “but for me it’s probably still the goal against the Islanders.”

Coming off his first full NHL season which included some inevitable growing pains, Kuznetsov delivered in his first career Game 7. With just over seven minutes remaining in regulation, Kuznetsov waited out noted Capitals killer Jaroslav Halak before beating him top shelf for the eventual game-winning goal. 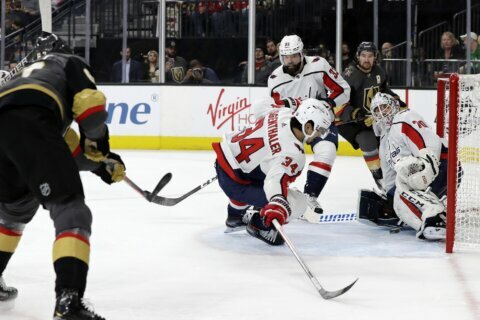