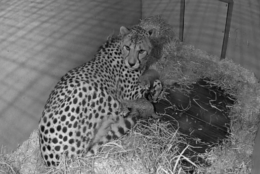 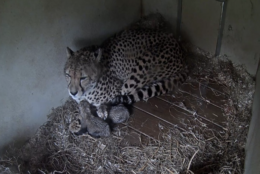 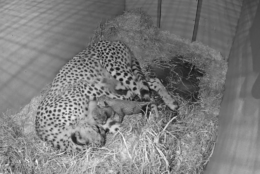 The cubs were born Monday, Oct. 3 to mother Amani, 4, and father Asante, 7. They are first-time parents, which zookeepers say make the cubs genetically valuable.

“There just aren’t very many cheetahs in the wild and not so many in human care,” Pamela Baker-Masson, the director of communications at Smithsonian’s National Zoo and Conservation Biology Institute, told WTOP. “They are a challenge; there’s no other way to put it — a challenge for breeding.”

The institute is part of the Cheetah Breeding Center Coalition, a group of 10 cheetah breeding centers across the country that aim to create and maintain a sustainable North American cheetah population under human care.

“At our Conservation Biology Institute, we’ve made huge progress in understanding their biology, their behavior, and doing some very innovative things using technology to freeze semen and other things that we need to do for artificial insemination,” Baker-Masson said. “We want a population of cheetahs with the most genetic diversity possible. Genetic diversity means a healthy, thriving population, and it enhances our ability to do more.”

Amani and Asante, however, were paired and bred naturally in July. Amani was trained to voluntarily participate in ultrasounds, and veterinarians confirmed her pregnancy on Aug. 8.

The cubs appear to be strong, active, vocalizing and nursing well, the institute said. Zookeepers are closely monitoring the new mom and her cubs via the Cheetah Cub Cam on the zoo’s website, which is available to view online.

Because the zookeepers are letting the mother bond with her cubs, it will take some time before the cubs’ sexes will be determined. A health check will be done on the cubs when the mom is comfortable leaving them for an extended period.

“We will just leave Amani alone and only sort of intervene if we see a problem,” Baker-Masson said.

Since 2007, 17 litters of cheetah cubs have been born at the institute’s campus in Front Royal.

Because of their impact genetically, the cubs may not come to the zoo in D.C. or be on public display anywhere.

“They’re incredibly valuable genetically so they will be in the whole breeding program, which is across North America and in other countries,” Baker-Masson said. “So I don’t want to get everybody’s hopes up that they’ll see them in person.”

She said to tune into the cheetah cam online and watch them learn from their mom.

“To really enjoy them, to find your moments of joy, tune into that cheetah cub cam and you’ll see them grow. And it’s really great to watch them that way,” she said.