Civil trial to begin in 2010 death of UVA lacrosse player

With George Huguely now about halfway through his 23-year prison sentence in the killing of Yeardley Love in Virginia, Love's mother is seeking to hold him responsible in civil court.
Listen now to WTOP News WTOP.com | Alexa | Google Home | WTOP App | 103.5 FM
(1/6) 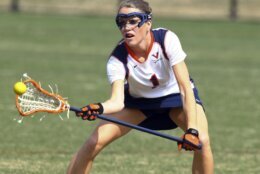 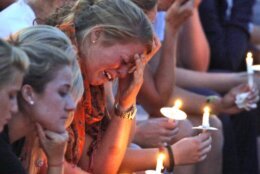 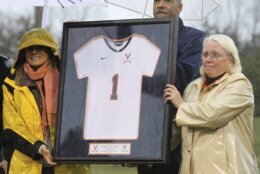 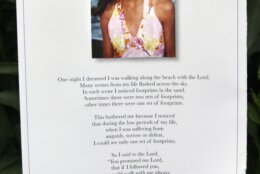 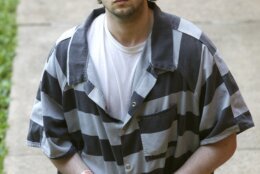 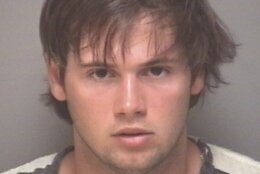 RICHMOND, Va. (AP) — A decade ago, University of Virginia lacrosse player George Huguely V was convicted of second-degree murder after a sensational criminal trial in the killing of his on-again, off-again girlfriend, Yeardley Love, a member of the UVA women’s lacrosse team.

With Huguely now about halfway through his 23-year prison sentence, Love’s mother is seeking to hold him responsible in civil court. Sharon Love’s lawsuit, which seeks $29.5 million in compensatory damages and $1 million in punitive damages, is set to go to trial Monday in Charlottesville Circuit Court, almost 12 years after her daughter was found dead in her off-campus apartment.

At the University of Virginia, an elite state school consistently ranked as one of the best in the country, Love and Huguely, both seniors who were weeks away from graduating, were known for their play on UVA’s nationally ranked men’s and women’s lacrosse teams. But they were also known for their volatile relationship. During Huguely’s criminal trial, a witness testified that he saw Huguely put Love in a chokehold months before she was killed.

Prosecutors said Huguely kicked a hole in Love’s bedroom door, then beat her after a day of golf and binge drinking, enraged that she had had a relationship with a lacrosse player from North Carolina. Love’s right eye was bashed in and she had a head injury that caused bleeding at the base of her brain stem.

A medical examiner concluded Love, 22, died of blunt force trauma to her head, but defense and prosecution experts offered differing medical opinions on the lethal consequences of her injuries.

Huguely’s attorneys said he only went to Love’s apartment to talk to her, but their argument quickly became physical. Huguely told police she banged her head against the wall of her bedroom, and she only had a bloody nose when he left.

During a videotaped police interrogation shown to the jury, Huguely was told by a detective that Love was dead and “you killed her.” Huguely is then heard asking repeatedly, “She’s dead?” and saying, over and over again, “I didn’t hurt her.” He also sobbed and said: “I did not do anything that could kill her.”

In the end, the jury rejected a first-degree murder charge against Huguely and convicted him of second-degree murder instead. The jury recommended a 25-year prison sentence, but the judge imposed a slightly lower sentence of 23 years.

The civil trial is expected to include many of the same witnesses and testimony — friends, roommates, other lacrosse players and medical experts — although many of them are expected to testify in videotaped depositions instead of in person.

Sharon Love initially filed a wrongful death lawsuit in 2012, but it was voluntarily dismissed years later after court rulings determined that Huguely was not entitled to coverage under a $6 million homeowners insurance policy held by his family.

A new lawsuit filed in 2018 dropped negligence claims, but added a claim alleging that an assault and battery by Huguely was the proximate cause of Love’s death. The lawsuit argues that punitive damages are warranted because the physical force used by Huguely and his failure to act by leaving her bleeding, injured and without any medical attention mean that he acted “with actual malice and in such a way as to evince a conscious disregard for the safety and life of Love, thereby willfully causing Love’s injuries.”

Kevin Biniazan, an attorney for the Love family, declined to comment on the lawsuit or upcoming trial.

Huguely’s attorney, Matthew Green, said the defense will acknowledge that Huguely’s assault and battery caused Love’s death and that her family is entitled to compensatory damages in an amount to be decided by the jury. But he said the defense does not believe punitive damages are appropriate.

“First, for the same reasons that the jury in the criminal trial did not believe that George’s conduct rose to the heightened level necessary for a first-degree murder conviction, we don’t believe the conduct rises to the heightened level of willful and wanton conduct necessary for an award of punitive damages. Second, an award of punitive damages is never required and is left to the discretion of a jury,” Green said.

Green said Huguely is expected to testify and will be brought from prison to court only on that day, not throughout the trial.

“On a personal level, George remains, extremely sorry, deeply remorseful, and unbelievably saddened about Yeardley’s death,” Green said. “He would do anything in the world to take that night back. Her death leaves a void he can never fill. ”