Almanac and coin found in time capsule beneath Lee statue in Va.

A rust-colored 1875 almanac, a cloth envelope and a silver coin were found Wednesday in a time capsule that sat beneath a towering statue of Confederate Gen. Robert E. Lee in Virginia for more than 130 years.
Listen now to WTOP News WTOP.com | Alexa | Google Home | WTOP App | 103.5 FM
(1/8) 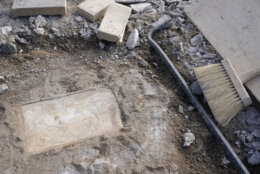 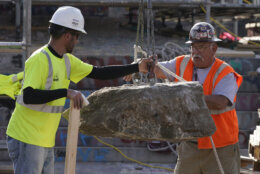 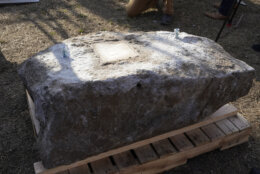 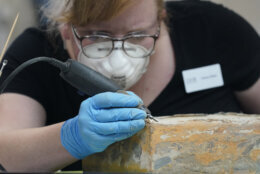 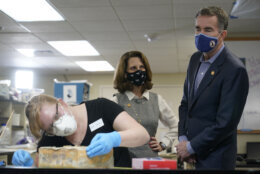 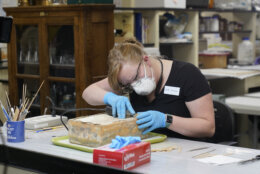 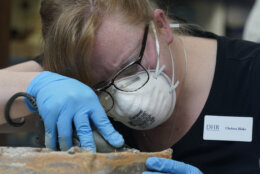 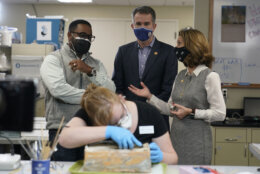 RICHMOND, Va. (AP) — A rust-colored 1875 almanac, a cloth envelope and a silver coin were found Wednesday in a time capsule that sat beneath a towering statue of Confederate Gen. Robert E. Lee in Virginia for more than 130 years.

Another book, tattered with a pink cover, appeared to be an edition of “The Huguenot Lovers: A Tale of the Old Dominion” by Collinson Pierrepont Edwards Burgwyn. There also appeared to a pamphlet of some kind.

There were three books total, all of which appeared to be water damaged. Gov. Ralph Northam said the books, once dry, will shed light on what people were thinking here in the late 19th century

“It’s an important day for the history of Richmond and Virginia,” Northam said, just minutes after lifting open the capsule.

The time capsule was embedded in the pedestal of the Lee statue in Richmond. But it’s not what many here were expecting after state conservators spent five hours gingerly prying it open.

A newspaper article from 1887 suggested that the capsule contains Civil War memorabilia and a “picture of Lincoln lying in his coffin.”

Records from the Library of Virginia also suggested that 37 Richmond residents, organizations and businesses contributed about 60 objects to the capsule, many of which are believed to be related to the Confederacy.

Besides there being far fewer objects, the capsules’ dimensions were smaller than expected. The capsule, which is about the size of a large shoe box, was also made of lead, not the copper that state officials believed it would be.

The time capsule had sat under the massive bronze equestrian statue of Lee, which was erected in 1890, for more than 130 years. The monument was long seen as a symbol of racial injustice in the former capital of the Confederacy. It was taken down in September.

The time capsule was found Friday by crews working to remove the pedestal where the Lee statue had stood.

The Lee statue was long soon as a symbol or racial injustice. Its removal in September came more than a year after Northam ordered that it be taken down following protests that erupted after the police killing of George Floyd in Minneapolis. The day after the statue was removed, work crews spent more than 12 hours searching for the time capsule in the 40-foot-tall (12-meter-tall) pedestal but were unable to locate it.

The Lee statue was one of five Confederate tributes along Richmond’s Monument Avenue and the only one that belonged to the state. The four city-owned statues were taken down in 2020, but the Lee statue removal was blocked by two lawsuits until a ruling from the Supreme Court of Virginia in September cleared the way for it to be taken down.

Northam, a Democrat, announced earlier this month that the enormous pedestal would be removed, a reversal from September, when the governor said the pedestal would stay in place so its future could be determined by a community-driven effort to reimagine Monument Avenue.

After Floyd’s killing in 2020, the Lee statue became a focal point of the racial justice movement in Richmond. Since then, the pedestal has been covered in graffiti, some of it profane and much of it denouncing the police. Some activists wanted to see it remain in place as a work of protest art.

© 2021 The Associated Press. All Rights Reserved.