A Virginia soul singer is dead after detectives say she was shot and killed by her son during an argument.
Listen now to WTOP News WTOP.com | Alexa | Google Home | WTOP App | 103.5 FM
(1/3) 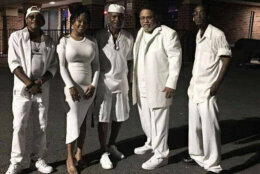 A Virginia soul singer is dead after detectives say she was shot and killed by her son during an argument.

The Spotsylvania County Sheriff’s Office said Latoya Acree, 41, was found laying in the driveway of a home on Pondoley Drive in the Oak Grove Subdivision after deputies responded to reports of a shooting. Acree was shot in the upper body and died from her wounds.

Deputies said Acree’s son, 21-year-old Elijah D. Smith, is responsible for the killing. He was arrested a short time after the shooting at a nearby hotel in Four Mile Fork and charged with second-degree murder and use of a firearm in the commission of a felony. Smith is being held on no bond.

Acree was a singer in the D.C. area band True Soul, and her bandmates are now mourning her loss.

“We were all devastated,” said Pam Gallahan, the band’s marketing director and close friend of Acree.

Gallahan said she was aware that Acree had a strained relationship at times with her son.

“I knew she had problems, not to that level, nothing where I was worried for her safety or anything like that,” Gallahan said.

Gallhan said Acree joined the band in 2019 and quickly became a beloved member of the band.

“She befriended everyone she met…she was just a very genuine and good-hearted person,” Gallahan said.

The band’s lead singer Caesar Roy said Acree hadn’t had any experience as a singer in a band before True Soul, but quickly became a star in the group.

“She was just starting to take off, that’s what’s so devastating,” Roy said.

Roy said he believed Acree was on her way to having a successful career both in singing and acting, after she recently played a role in an independent movie that was filmed in Washington.

Both Gallahan and Roy said her loss has left the band heartbroken.

“She’ll be remembered for her heart, just as much as her voice,” Gallahan said.