Several Virginia Democratic candidates for governor took part in a town hall meeting Tuesday night focused on criminal justice reform, and all called for parole to be restored for prison inmates.

Virginia abolished discretionary parole in 1995 and required offenders to serve at least 85% of their sentences.

“I want everybody to have access to parole,” said former Gov. Terry McAuliffe.

Legislation that would have restored parole was introduced this year in the Virginia General Assembly, but did not make it out of committee, in part because lawmakers heard emotional testimony from family members of crime victims who pleaded with them to guarantee the assailants would stay locked up.

McAuliffe argued that mistakes people made when they were younger should not necessarily impact them for the rest of their lives.

“You show me someone who’s never made a mistake, and I’ll show you a liar,” he said, promising to establish an “office for returning citizens” that would work with inmates and help them transition back into society.

State Sen. Jennifer McClellan said if she were elected, she would separate the pardons process from the parole process and would “invest in more investigators to address the backlog of petitions that we have for both.”

“The system does not begin to focus on reentry until, at the earliest, six months before someone gets out,” she said. “That’s too late. We need to be starting on a reentry plan for everyone.”

“We are the number one state in the nation when it comes to referring young people to the criminal justice system for school-based infractions,” he said. “It’s not even close. We are nearly three times the nearest state.”

The meeting was hosted by the Exodus Foundation, a nonprofit group that helps inmates with the transition from being in prison to being back into the community. 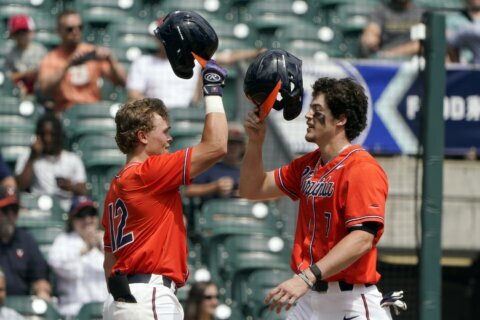