Roads re-open after fog, ice causes 69-car pileup, injuries on I-64 near Williamsburg

A pileup involving at least 69 cars caused massive delays in the area of I-64 near the Queens Creek Overpass in York County, Virginia, according to the York-Poquoson Sheriff's Office.
Listen now to WTOP News WTOP.com | Alexa | Google Home | WTOP App | 103.5 FM
(1/7) 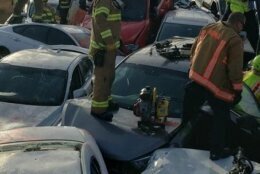 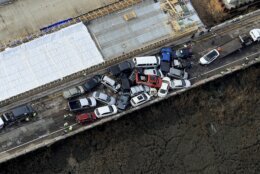 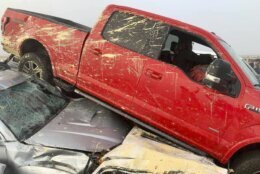 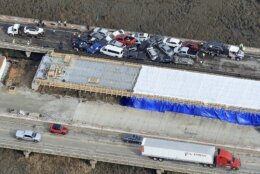 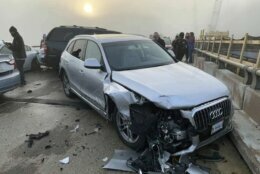 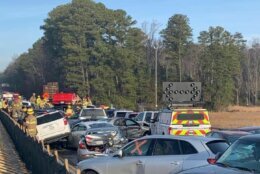 A pileup involving at least 69 cars caused massive delays and numerous injuries on Interstate 64 near the Queens Creek Overpass in York County, Virginia, according to the York-Poquoson Sheriff’s Office.

The series of crashes started at 7:51 a.m. Sunday and were caused by ice and fog on the Queens Creek Bridge westbound lanes of I-64 near the 239 mile marker in York County, Virginia, according to Virginia State Police. Crashes in the eastbound lane happened due to rubbernecking.

By Sunday evening, the police updated the number of cars involved to 69, noting that 55 people were taken to the hospital. While none of the injuries are considered life-threatening, 11 are serious.

“At the time that the crashes began, there was ice on the bridge and it was extremely foggy so those are being investigated as factors in what sparked the crashes to occur in both directions of I-64,” said Corinne Geller, Virginia State Police spokesperson.

I hope so too 🙏🏻 the fog was crazy. (video Chloe took) pic.twitter.com/DWJkS4ZLEl

“We’re advising folks obviously to avoid the area if they can,” Geller said Sunday morning. “We understand that it’s a very busy time with Christmas just a matter of days away and to be monitoring the Virginia 511 either online or on the app or on twitter.”

When it comes to driving in fog and ice, Geller said that police advise drivers to pay attention and to check the road conditions ahead of time.

“We know that there is going to be increased volumes of traffic now through probably the rest of the week as people come and go for their Christmas activities and holiday festivities and so forth so we’re just advising folks to plan extra time and to take their time,” Geller said. “Don’t speed, and, of course, if you ever encounter fog you always want to slow your speed and be alert to the probability of the vehicles ahead.”

View the approximate location of the incident on the map below:

State sees spike in calls to hotlines for domestic violence