Virginia Gov. Ralph Northam recalled lawmakers to the state Capitol in coming weeks to take up a package of gun-control legislation.

Northam made the announcement during a Tuesday morning news conference.

“We must do more than give our thoughts and prayers. We must give Virginians the action they deserve,” Northam said at the news conference.

Northam said he has repeatedly proposed gun safety laws to the Virginia General Assembly including universal background checks, child access prevention, one gun a month laws and banning assault weapons. The proposals never made it through.

“None of these ideas are radical,” Northam said, adding that none of his proposals violate the Second Amendment or interfere with hunters.

“If we can save one life, it is worth it,” Northam said.

Northam appeared at the news conference with Lt. Gov. Justin Fairfax and Attorney General Mark Herring. It was the first time Northam, Herring and Fairfax have appeared together since their separate scandals roiled Virginia government in February. 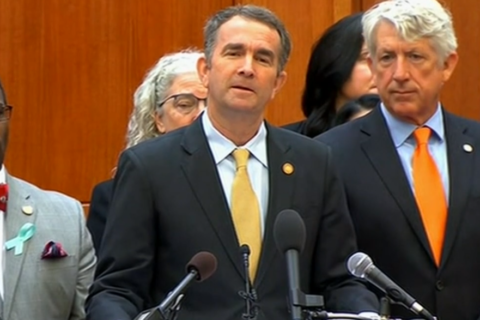