A jury recommended the sentence for James Alex Fields on Tuesday for having driven his car into a crowd of counter-protesters at a white nationalist rally in Charlottesville, Virginia, in 2017.
Listen now to WTOP News WTOP.com | Alexa | Google Home | WTOP App | 103.5 FM
(1/7) 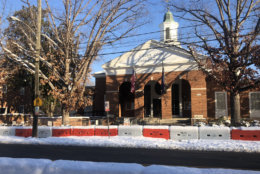 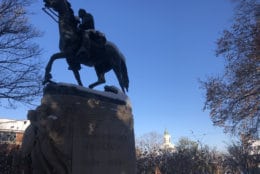 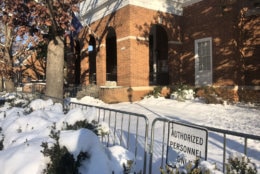 CHARLOTTESVILLE, Va. — A jury recommended life in prison Tuesday for James Alex Fields for murdering Heather Heyer when he drove his car into a crowd of counter-protesters the day of a 2017 white nationalist rally tied to Confederate statues.

Fields, 21, was convicted of first-degree murder and nine other charges on Friday, including the wounding of others in the crash and fleeing the scene. Jurors had the option of 20 years to life on the first degree murder charge, plus additional time on the other counts.

The judge will formally impose a sentence March 29. Virginia judges typically follow a jury’s recommendation and cannot increase the penalty beyond it.

After the proceeding, prosecutor Joseph Platania called the jury’s verdict and recommendation “a true act of public service.”

He also thanked the other victims and their relatives, who “had to some extent relive” their trauma in order to testify. “We are unable to heal them or bring Heather back,” he said. “We’re hoping they can take some level of solace from these convictions and sentences.”

Heyer’s mother, Susan Bro, said the proceedings of the past few days were “really still hard to process. … I’m running through about 50 different emotions all at once.”

She said that the verdict on Friday “far more emotional for me. Once I heard what the minimum sentences were i breathed a sigh of relief.” Tuesday’s sentencing recommendation left her with “a mix of emotions; they nullify each other. I’ll sit home and cry tonight because I would have been decorating for Christmas by now.”

Of Fields, she said, “I don’t hate him, but my God, the kid’s messed up. He should be locked up. … I hope his mother can find some measure of peace.”

She added that “I do not have hate for this young man,” but instead told prosecutors that “I trusted them to deal with this. I trusted the system of justice to handle what it needed to handle.”

She also called to continue Heyer’s social justice work. “The things that Heather died for, I’m not seeing a lot of progress in the last year and a half. We’ve had a victory today, but we must put direct actions to our words.”

Anna Malinowski, of Show Up for Racial Justice Charlottesville, said police and other Charlottesville officials had to face up to “the mistakes that they made that led up to this happening.” She called on the city to “continue fighting white supremacy. … We will not have peace without justice.”

Bro added that she was inspired by a quote from the late former first lady, Barbara Bush, who lost a 3-year-old to leukemia. Bush said the best way to overcome such a loss was “doing by others,” and the Heather Heyer Foundation was Bro’s response. She said the foundation had given out scholarships “to have young social young social activists in positive non-violent social justice.”

“You can’t live in that wave of grief and anger,” Bro said.

“Heather was always mortified to have her name come up in public. … But she’d be excited that hate didn’t win. … You can’t bring hate here and get away with it.”

Bro said she would be involved in Fields’ federal hate-crimes trial, even though Fields is certain to spend the rest of his life in prison. The charges get to what she called an essential question: “What do we do with hate in this country?”

During the initial phase of the trial, Jurors were shown evidence including video of Fields marching and chanting with white nationalists, a meme Fields had posted months earlier of a car plowing into a crowd and a text message he sent his mother the day before the car attack that included a photo of Adolf Hitler.

During the sentencing phase, jurors heard from several of the people injured in the Aug. 12, 2017 crash, and Heyer’s mother.

Jeanne “Star” Peterson told the jury her life has been “a living nightmare” since she was hit by Fields’ car. Her right leg was shattered, and she’s had five surgeries to try to repair it. She also suffered a broken spine and still hasn’t been able to return to work.

Wednesday Bowie said Fields tried to destroy a community that day. She told the jury “the world is not a safe place” with Fields in it.

Susan Bro, Heyer’s mother, said in emotional testimony Monday that her daughter’s death was like an “explosion” in her family.

Heather Heyer was a 32-year-old paralegal and civil rights activist. Bro said Fields tried to “silence” her daughter with his car, and said: “I refuse to allow that.

Daniel Murrie said Fields went off his psychiatric medication at age 18 and built an isolated “lifestyle centered around being alone.”

People who attended the white nationalist rally with Fields testified earlier in the trial that Fields seemed exactly like everyone else at the “Unite the Right” event.

The Associated Press and WTOP’s Megan Cloherty contributed to this report.