In Falls Church, a vigil for school shooting victims — and calls for change 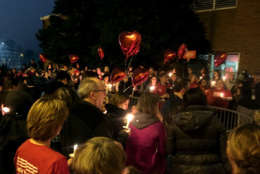 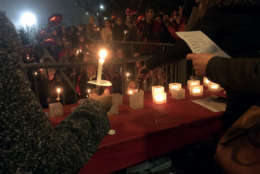 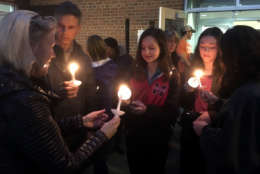 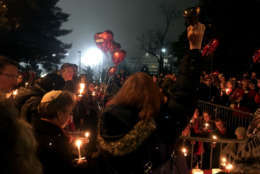 FALLS CHURCH, Va. — Hundreds gathered for a local candlelight vigil Monday in honor of the 17 victims of last week’s school shooting in Parkland, Florida. But it was also a night to speak out on changing national gun policies.

Moms Demand Action volunteer Seton McIlroy said in an email that law enforcement estimated between 350 to 500 people attended the vigil.

“We handed out more than 400 candles,” McIlroy said.

The vigil at George Mason High School in Falls Church, Virginia, came less than a week after a gunman opened fire at Marjory Stoneman Douglas High School. Nikolas Cruz, 19, is being held without bond, charged with 17 counts of first-degree murder.

Monday’s vigil, organized by the Virginia chapter of Moms Demand Action, featured Salli Garrigan, who was in a chorus room when two students began a deadly rampage at Colorado’s Columbine High School in 1999, killing 13 people.

“In the days that followed, we were counseled, consoled and promised that this was an anomaly, this would never happen again,” Garrigan said. “We were failed.”

Kaia Jefferson, 15, a sophomore at George Mason High School, said the shock of what happened in Florida has motivated her to join other students who are pushing for lawmakers to address gun violence.

“One voice is great, but multiple voices together can create a lot more change,” she said.

“It just shows how much the American people crave action on guns,” said Beyer, who would like to see a ban on what he called weapons of war. He is also co-sponsoring a bill that would enable people to petition a judge to add mentally ill family members to a background-check list.

“People knew Nikolas Cruz was crazy,” Beyer said. “People knew [Seung-Hui] Cho at Virginia Tech was mentally ill,” he added, referring to the 2007 shooting that killed 32 on the Blacksburg campus.

But such calls for stricter gun laws and the banning of certain types of guns and ammunition has hit some resistance from gun rights supporters in Virginia.

Philip Van Cleave, president of the Virginia Citizens Defense League, said what should happen is a measure allowing teachers and staffers with gun permits to bring their guns to school. Van Cleave cited illegal drug use in America as an example of why banning guns such as the AR-15 wouldn’t work.

“Anybody that thinks that by banning a gun and taking away what would be the most popular rifle in America would somehow make school shootings stop, is probably smoking illegal drugs themselves,” Van Cleave said.

Also wary of new measures is Corey Stewart, Prince William County Board of Supervisors chairman. He believes attention should be put on mental illness and on enforcing gun laws that are currently on the books.

“Gun control is not the answer. It doesn’t work,” Stewart said.