An old slave trade auction block sits on the corner of William and Charles streets, and the City Council is offering two options: keep the block in place with additional information and protections or move it to a museum.
Listen now to WTOP News WTOP.com | Alexa | Google Home | WTOP App | 103.5 FM

FREDERICKSBURG, Va. — Speakers at a public forum Saturday were split on what should be done with an old slave trade auction block that sits on the corner of a city street.

The City Council is only offering two options: keep the block in place with additional information and protections or move the block to a museum.

Roughly 100 people filled the auditorium at James Monroe High School for the forum; about a fourth of them spoke. A number of people supported each option, and division between each side was not based simply on race.

Ira Weston, Linda Juggins and Robert Lamb, for instance, agreed that the auction block should be kept in its location with more context added.

“I am a direct descendent of the last African slave sold off the block,” Weston said.

“My parents live on Juggins Road, which intersects with Doc Stone Road,” said Juggins. “My relatives were owned by Doc Stone’s mother. … When I see that stone, I see survivors. I’m a descendent of survivors.”

Lamb said five generations of his family all lived at an old Spotsylvania County plantation called St. Julien. “That’s where they had quite a few slaves,” he said.

‘If you want to preserve history, put it in books’

Others felt that keeping the old auction block on the corner of William and Charles streets was not the better option.

Lee Lewis, for instance, said a city street isn’t the place to keep this constant reminder of the city’s dark past.

“I’m 68 years old. I’ve been away maybe eight years. That stone has been a thorn in my side since I was 12 years old,” said Lewis, who supports putting the block in a museum. “… If you want to preserve history, put it in books.”

Earnest Woodson likened it to keeping another symbol.

“If I had a noose in my hand, you would all react to that,” Woodson said. “If you saw a noose outside at the school, you would react to that. To me, that block represents the same thing that a noose represents.”

But the concept of people going into a museum took a beating at the forum. Juggins, for instance, said it “pushes things to the side.”

“Leave it there so that when people visit Fredericksburg, my friends come, we stop by there and I show them that so that they see that along with Carl’s Ice Cream and everything else,” she said.

“I encourage you keeping the block [where it is] because if you move it to a museum, no one will see it,” Carter said. “I know I will never go to the Fredericksburg Area Museum — just being real.”

Carter told the crowd that he has spent a significant amount of time looking into his ancestry, which included a trip to Africa. He also supported keeping the block in place, with additional context.

“Being a resident of Caroline County and living in Woodford, Virginia, I’m surrounded by Jefferson Davis Highway, Stonewall Jackson Shrine, Fort A.P. Hill. All of those were leading Confederate figures that I had never knew were Confederate,” Carter said. “To have a symbol like this, a block where potentially my ancestors may have moved through there, it has a moving part of my history. Without having this marker of a slave block, who would know? None of us would know.”

He noted that keeping and maintaining the block is also important because of the region’s significance in the nation’s slave-trading history and culture.

“Have you ever seen ‘Roots’?” Carter rhetorically asked the audience. “The ‘Roots’ story takes place in Spotsylvania County, Virginia.”

Some, however, felt it wasn’t their place to make such a decision.

“I did not feel that I should give an opinion of whether the slave block stays in its current location or is moved to a museum,” Anne Little said. “I think that decision should be made by the descendants of those slaves.”

“Surely, the African-American community should weigh heavily in the decision,” said Smith, who had walked in supporting moving the stone into a museum.

“I invited a friend of mine and I just knew he would agree with me that you need to move that doggone block,” Smith stated. “His comment was ‘No, it needs to stay.’ So, now that I have listened to these speakers before me, I have an appreciation for both points of view.”

‘We owe it to ourselves to put it in context’

Ronnette Cooper took issue with its current state: out in the open on a city sidewalk with a small plaque and across the street from an Italian restaurant.

“Not only do we owe it to ourselves to put it in context — I’m not saying a museum, but I am saying in context — not where you can eat pizza and gaze over and see somebody jump on it,” Cooper stated. “… We need to have the complete story.”

But there was also a difference of opinion on that.

“That artifact on the corner, it tells a lot,” said Robin Nimmo, a licensed tour guide. “Without it being there, I don’t have a conversation with people. ”

The Fredericksburg City Council will have the final say after comments funnel in. It will continue accepting online comments until noon on Monday.

There were 477 comments submitted as of Saturday morning, with “99 percent” of them described as being local.

The City Council will meet again Tuesday and could make a decision then. Mayor Mary Katherine Greenlaw, however, doubted something would be decided that quickly.

“We’ll further consider what it looks like if it stays, if it goes,” she said.

“We think Fredericksburg is a model of civic discourse,” she said. “We always have been and we always will be.” 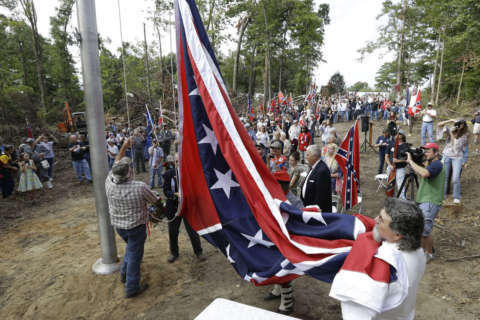