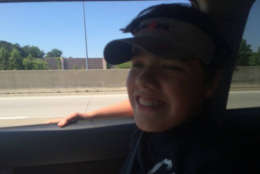 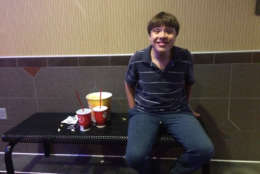 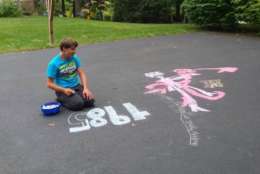 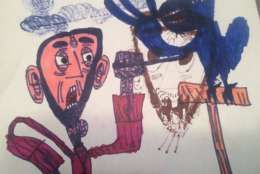 WASHINGTON — All parents hope to help make their children’s dreams come true — few have a more compelling story than Coy Barefoot, and his son, Whitman.

Coy Barefoot is a noted Jefferson scholar and the editor of the Center for Media and Citizenship at the University of Virginia, whose observations about life in the Charlottesville, Virginia, area are a fixture on television, radio, social media and the web.

He’s also a single dad, with an autistic son, 15-year-old Whitman Barefoot. The pair has had a dream they’ve shared for years.

“Ever since he was 9, he’s been asking to go to Los Angeles,” Coy said. “He has a very healthy obsession with movies, and anything involved with movies.”

Whitman and his twin sister were born in 2001. Coy and his wife divorced in 2009. The parents live near each other, so Whitman spends a lot of time with each.

Coy and Whitman have been going to see movies in theaters for years, which can be difficult for people with autism because of the overstimulation.

“When Whitman first started going to the movies, he couldn’t sit through the trailers — they were too overstimulating, too exciting,” his father recalled. “So, we would get our seat, and wait out in the hall until the trailers were through.”

Now, the father and son have an established movie-going routine and see at least two to three movies a month.

“We’ve got a movie calendar on the kitchen wall,” Coy said. “He picks the movies out, and I buy the tickets and popcorn. He’s got his favorite seat by the door, because he likes to get up and run out sometimes.”

At first, Whitman liked the same movies that any other kid would like.

“When he was growing up, we saw every animated film for about 10 years,” Coy said. “The ‘Wreck-it Ralph,’ the ‘Wall-E,’ down to the ‘Norm of the North,’ or some of the lesser-quality movies — he wanted to see them all.”

But now Whitman’s taste in films is developing, Coy said.

“As he’s gotten older, he’s started to ask to see movies that are appropriate to his age. which I have welcomed, of course, since I see all the movies with him,” Barefoot said. “We just saw ‘Wonder Woman,’ we both really enjoyed that. And we just saw ‘Captain Underpants.’”

While they used to have movie night at home, his father said Whitman rarely chooses to watch a film there.

The Hollywood dream and the promise

“Whitman has asked me for many years to see Los Angeles,” Coy said. “He wants to do all the touristy stuff: The Santa Monica pier, the Griffith Observatory, the Walk of Fame. And he wants to see the desert.”

“When he was younger I would tell him, ‘When you’re 15 we’ll figure that out,’” his father recalled. “That seemed like a faraway time, and maybe I would have the money then to take him across country.”

But now that “faraway time” has arrived.

“Here we are, it’s the summer of his 15th, it’s the summer of my 51st,” Coy said. “And now I have reached out to friends and family to help make his dream come true, so that he can see these things that he’s talked about and dreamed about for so many years.”

“Universal Studios tour, and Disneyland. It is such a magical place to him, and I want to do whatever I can to help him get out there and realize what is truly a dream for him.”

A cross-country trip is costly, so earlier this week Coy asked his Facebook friends for suggestions on keeping the costs down.

The goal was reached within one day.

“I’ve been so overwhelmed and humbled by the response,” he said. “It’s amazing.”

Logistics of making the dream happen

For a single parent with a teenage autistic son, Coy acknowledges a trip to Hollywood will include some challenges.

“I’ve given a lot of thought into how we can pull this off, and how I can get a 15-year-old boy with autism out to Los Angeles from Charlottesville, Virginia,” he said. “The thought of putting him on a cross-country flight is really untenable.”

“My concern is if he had some sort of a meltdown during that five- or six-hours flight, we would end up on YouTube, or the nightly news, or both,” he half-joked. “It’s a genuine concern I know many parents of children with autism share.”

“I know there are people listening to me who, when I talk about autism meltdown they know exactly what I’m referring to,” he said. “It can be a little scary.”

Developing strategies to help his son has come from experience, patience and love.

“Autism doesn’t really come with a guidebook, just like any parenting, you’re thrown in the deep end, and you have to figure it out as you go along,” Coy said. “I have benefited, and I know Whitman’s mother has benefited from a community of autism parents and we’ve had so many conversations with others who are in the same boat on these rocky seas.”

So, Coy and Whitman are scripting their own “buddy road trip” epic.

“In an ideal world, we would have RV America, or someone who had access to a camper to help us out,” Coy said. “I think it would be easier on Whitman to be able to stand up, and walk back to a bed or table, and move about a bit.”

Coy said he hopes they’ll be able to borrow a small camper, if one is offered.

He says he is fortunate to have an available time window this summer and says his son is “absolutely ready to walk out the door and start this trip.”

Knowing his son will be partially dependent upon him for his whole life, Coy welcomes chances to spend quality time with him.

“We go to the pool together, we go to the diner,” Coy said. “He loves to, what he calls ‘explore the city,’ where we just drive around Charlottesville, and I talk about the history of UVA or Charlottesville. He really enjoys that.”

If the excursion comes to pass, Coy plans to document it with Facebook posts from the road, complete with Whitman’s drawings, in part to thank those who made the trip possible.

That silence speaks loudly of Coy’s devotion to his son.

“I’m so fortunate to be his dad, and I’m so proud of him, and I’m so thrilled at the possibility that we can take this epic cross-country journey together.”