Ten years after he nearly died in a mass shooting at Virginia Tech, Kevin Sterne grapples with the knowledge that one day he must tell his son about the horror he worked so hard to put behind him.
Listen now to WTOP News WTOP.com | Alexa | Google Home | WTOP App | 103.5 FM

BLACKSBURG, Va. (AP) — Kevin Sterne has spent 10 years trying not to let himself be defined by the mass shooting that nearly killed him at Virginia Tech. But now that he’s a new father, Sterne grapples with knowing that one day he must tell his son about the horror he worked so hard to put behind him. 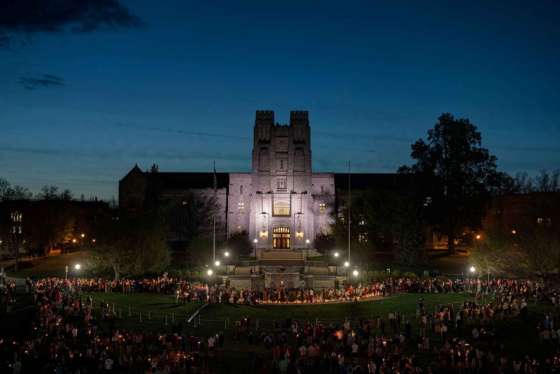 Here's a look back at observances.

“How do I approach that? Do I talk about it? What age is appropriate to go into what kind of detail?” Sterne asked, seated outside the building where he was taking a German class on April 16, 2007, when a mentally ill student with a gun chained the doors shut and killed 30 people before killing himself.

Not until months after the shootings did Sterne’s mother hear him talk about what he saw that day. Even now, he doesn’t discuss it much: the day a bullet cut through his right leg and another one ripped his femoral artery. The day he wrapped a power cord around his leg as a tourniquet, likely saving his own life. The day four officers carried his bloody body out of Norris Hall — an image plastered on the front pages of newspapers across the country.

How do you explain that to a little boy?

Seung-Hui Cho killed 32 people on campus that cold April day. More than two dozen others were wounded by bullets or hurt trying to escape. It was, at the time, the deadliest mass shooting in recent U.S. history. A massacre that claimed 49 lives at an Orlando, Florida, nightclub surpassed it last year.

The Tech shooting motivated schools across the country to reevaluate campus security.

It also prompted Virginia lawmakers to close a loophole that allowed Cho to buy guns even though a judge had declared him a danger to himself and ordered him to get involuntary mental health treatment. But a push from Tech survivors and relatives of the slain failed to persuade lawmakers to tighten oversight of sales at gun shows, revealing the depth of the gun culture in this Southern state.

Over the years, other students wounded at Tech have graduated and moved away, many becoming advocates for gun-control and campus safety. Quiet and unassuming, Sterne has chosen to stay out of the spotlight, remain at the school and try to continue his life the way he imagined it would be before it was upended.

“I just don’t think he wants that one day, that one horrific day that he can’t change … to control who he is,” his mother, Suzanne Grimes, said.

He still sometimes loses feeling in his right leg, where the bullet remains lodged in the head of his femur. When the anniversary approaches, he gets more irritable and stressed — the effects of post-traumatic stress disorder, he believes. Loud noises can still make him uneasy. His mother notices he gets anxious in crowds and sits with his back to the wall at restaurants so he can see the entrances and exits.

And he has never re-entered Norris Hall.

“This isn’t something that happens and then it’s gone and everybody is fine … It stays with you,” said Sterne, now 32.

Sterne is the only one of the wounded students still at Tech, where he works as an engineer in two labs. While recovering in the hospital, he was accepted at graduate school here and never considered not returning, despite protests from his mother. In the weeks and months that followed, he found it comforting to be around others on campus who witnessed the same horror. When he was offered a job at the school, he accepted and never left.

He didn’t want to leave just because that terrible thing happened to him here, he said.

“It will be an event that changes and kind of shapes our lives, but there are so many other things to do,” Sterne said.

On the massacre’s 10th anniversary weekend, Sterne will bring his wife and son to campus to join other survivors for events honoring the lives lost that day. Not even a year old yet, his son is still too young to understand the reason for the solemn faces. Sterne knows tough conversation will eventually come.

But for Sterne, Tech is no longer just a place of tragedy: It’s where he built a career, started a family and survived.

“I think one of the most incredible things about Kevin is he’s not the guy who was shot on April 16,” his wife, Kacey Sterne, said. “He’s Kevin Sterne, an electrical engineer. He self-identifies as a nerd. He’s a dad now.

Follow Alanna Durkin Richer at http://twitter.com/aedurkinricher. Read more of her work at http://bigstory.ap.org/journalist/alanna-durkin-richer .