Biologists are running tests on a second humpback whale found dead in Virginia waters in the span of a just a few days. Scientists believe the first whale died from a propeller wound, although they're waiting for a pathologist to confirm that.
Listen now to WTOP News WTOP.com | Alexa | Google Home | WTOP App | 103.5 FM
(1/2) 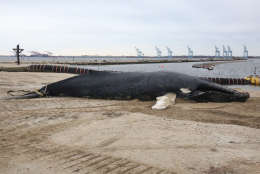 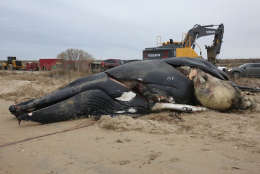 WASHINGTON — Biologists are running a battery of tests on a second humpback whale found dead in Virginia waters in the span of a just a few days.

Biologists are testing the adult male humpback whale spotted near the Bay Bridge over the weekend and pulled to Kiptopeke to determine how it died and how it lived. 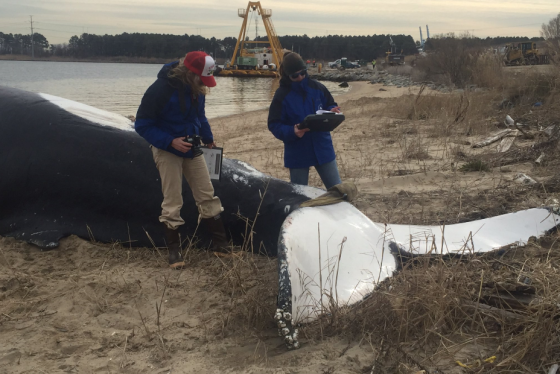 Officials speculate the young male might have been swimming in a shipping channel.

“We try and collect as much biological information as we can. The logistics of collecting that information can be challenging,” said Alex Costidis with the Virginia Aquarium and Marine Science Center.

Details of the mammal’s length and weight are still not known, but Costidis said it’s older than the first humpback, found Feb. 2, and likely exceeds 30 feet in length and weighs at least 7 tons.

They know it’s older than the juvenile whale pulled ashore to Craney Island near Hampton Roads last week because it was first cataloged in 2012, meaning it’s at least three years old. The aquarium has some 200 whales which frequent Virginia waters identified and cataloged.

When a dead whale is discovered, an investigation begins to determine its cause of death.

“There’s some pretty significant challenges in terms of just handling that much weight. You need heavy equipment. You need powerful boats to tow it. You need very large knives to examine it, and there’s obviously numerous safety issues as well,” he said of the biologists trying to work around a 15,000-pound animal.

Male humpback whales tend to roam independently, but Costidis said they’ve been known to form male pairs as well, although it’s not clear whether that’s the case with these two dead whales.

“We don’t have any evidence they hung out together, so we have to operate under the assumption they didn’t,” he said.

Biologists wont know for a few days what killed the second whale.

The team is leaning toward the conclusion the first whale was killed by a propeller strike, but a pathologist has yet to confirm that.

“We had a pretty strong suspicion last week based on the fact that there were four really large propeller chop wounds in it. But we had to get inside and look for the evidence that those wounds occurred when the animal was still alive, because dead animals do get run over after they die,” Costidis said.

Based on the temperature and prey available, Costidis said it is normal for humpbacks to be in the mid-Atlantic this time of year. 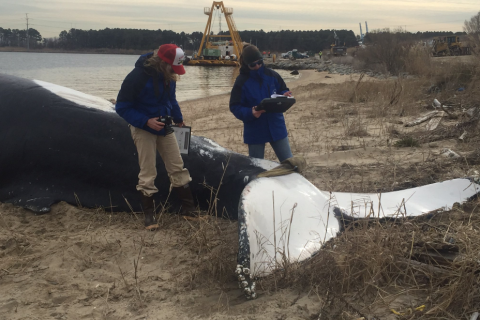