Virginia's General Assembly session, which starts Jan. 11, could bring about major changes to how Virginians cast their ballots. Here are highlights of some of the major initiatives being advanced by state lawmakers.
Listen now to WTOP News WTOP.com | Alexa | Google Home | WTOP App | 103.5 FM

WASHINGTON — Virginia voters may no longer get to wait until primary day to decide which party to vote in; absentee balloting or voter identification laws could change, and lawmakers could face term limits under a series of competing proposals in the General Assembly.

The annual session runs only into late February, so action on the bills and proposed constitutional amendments must happen within weeks of lawmakers gaveling in on Jan. 11.

The restoration of voting rights for felons is expected to be a significant issue in the session. Gov. Terry McAuliffe moved to restore the voting rights of more than 200,000 felons in June, but that was eventually overturned by the Supreme Court of Virginia. McAuliffe has since continued to restore rights at a smaller scale.

Members of the General Assembly have introduced a series of proposed constitutional amendments that would automatically restore the right to vote for some or all felons after they have completed their sentences, or allow for a pathway to get those rights back.

A proposal from a number of Democrats, including Del. Marcus Simon, D-Falls Church, would eliminate the state constitution’s restrictions on felons voting.

Senate Majority Leader Tommy Norment, R-Williamsburg, has introduced a competing proposal that would automatically restore the rights of anyone convicted of a “nonviolent” felony following the completion of any sentence and payment of fees. That proposal would eliminate the governor’s ability to restore the rights of other felons.

Proposals from other lawmakers would give the General Assembly the authority to lay out a process for felons to follow to get their rights restored, while still allowing the governor to take action for other felons.

The General Assembly must pass a proposed constitutional amendment twice with an election in between before the proposal can be sent to voters the following November.  With a statewide election this fall, any proposed amendment passed in this session and in next year’s session would go to voters in 2018.

Del. Greg Habeeb, R-Salem, has introduced a bill, contingent on the approval of an amendment giving rights back automatically to only “nonviolent” felons, that would define violent felonies.

Casting your ballot and voter ID

Republicans — who control both houses of the General Assembly pending special elections Jan. 10 for two Senate seats — have argued that tighter restrictions on voting are needed.

Del. Buddy Fowler, R-Ashland, proposes requiring that a copy of a photo identification be submitted with any request for an absentee ballot, with another copy of a photo ID required to be sent in with the completed ballot. Like a similar bill filed by Sen. Amanda Chase, Fowler’s bill would provide an exception for military and overseas voters.

Virginia already requires that voters show IDs to cast ballots in person. Del. Rip Sullivan, D-Arlington, proposes expanding acceptable identification to include college identification cards from any U.S. institution of higher education, rather than just those in Virginia. Sen. Jennifer Wexton, D-Leesburg, also is suggesting that the expansion of acceptable identification include those issued to residents or others receiving services from certain social services, and health or mental health care providers.

One proposal would allow no-excuse-needed, in-person early voting in the three weeks leading up to an election, similar to what’s done in Maryland and D.C. Another would eliminate the need for excuses to vote absentee by mail as well. Two other proposals would allow senior citizens to vote absentee.

After the discovery of a pair of instances of tied to false forms submitted to registrars this fall, a proposal by Fowler would require any individual or group doing voter registration to register with the Department of Elections. A similar bill from Del. Mark Cole, D-Spotsylvania, would require each group to give specific identification numbers to each volunteer so that forms could be tracked. The bills would also prohibit paying workers or volunteers based on the number of applications they collect.

Virginia’s open primaries could be on the way out if two Republican senators have their way.

Sen. Mark Obenshain, R-Harrisonburg, and Sen. John Cosgrove, R-Chesapeake, each have each proposed a change that would have voters register with a party affiliation. Voters who do not choose a party would be labelled independent and might not be eligible to vote in party primaries beginning in 2018.

Each proposal would also require the head of the state party to tell the Board of Elections at the start of the year whether it would have open or closed primaries over a 12-month period.

Obenshain’s bill would also allow party registration to determine which parties are allowed to continue to get listed higher on the ballot than independent candidates. In addition, it would change the required number of signatures a candidate must submit in order to get on a primary ballot, so that it’s based on the number of registered voters of that party who would be represented by the seat rather than based on the number of people the position represents.

While it is not likely to pass, Del. Sam Rasoul, D-Roanoke, has proposed making Virginia’s primaries open for candidates as well as voters: The top two candidates in the single primary, regardless of party, would advance to the general election in statewide, General Assembly and congressional races.  California has a similar system.

Term limits, or a two-term governor?

A handful of proposed constitutional amendments would set term limits for members of the General Assembly, or permit a governor to serve successive terms.

Chase, a Republican senator from Midlothian, suggests limiting members of the General Assembly to no more than 12 years of full terms in each house, beginning in 2020.

Surovell and Sen. Adam Ebbin, D-Alexandria, each have proposed allowing a governor elected in 2021 or later to be re-elected to another term.

Two bills introduced by Republicans would split the votes by congressional district, while a bill introduced by Simon would bring Virginia into the National Popular Vote Interstate Compact. The compact — already approved by D.C., Maryland and nine other reliably Democratic states — would take effect when states controlling a majority of the Electoral College vote sign on. The states agree to then cast their votes for the winner of the nationwide popular vote. 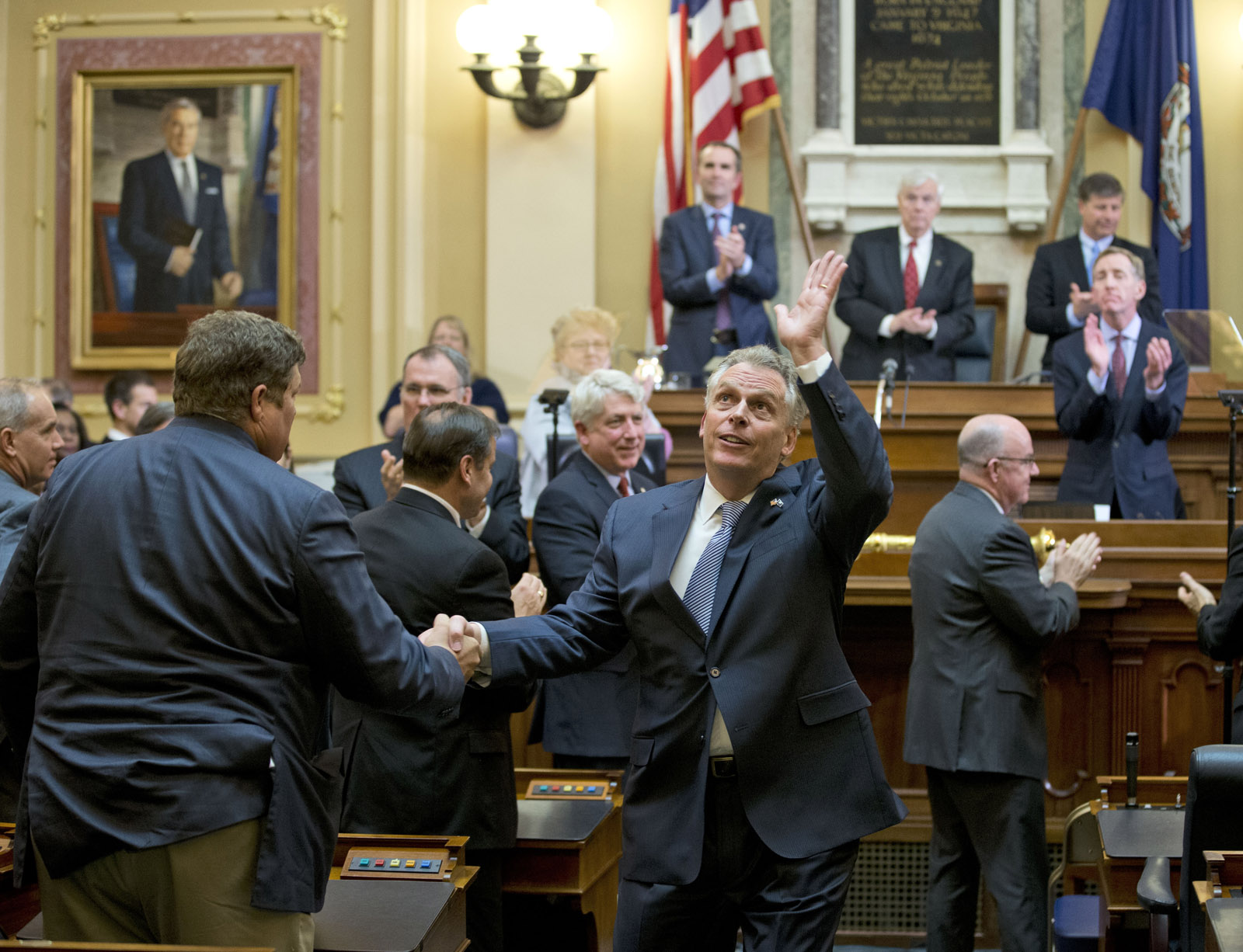