Va. police want drivers to put the phone away or risk a ticket

Take your eyes off the road and put them onto your cellphone for just a moment at highway speed and you risk a crash.
Listen now to WTOP News WTOP.com | Alexa | Google Home | WTOP App | 103.5 FM

WASHINGTON — “Put the phone down” is the message Virginia State and Fairfax County police are trying to convey to drivers.

Virginia State Police Capt. James de Ford said that troopers will issue citations to anyone they see texting while driving.

In Fairfax County, more than 13,000 tickets have been issued for failing to pay full time and attention, which includes texting while driving, said Cmdr. Bob Blakley. The cost of this citation starts at $97.

Virginia Deputy Secretary of Transportation Grindly Johnson said that a leading cause of accidents in this region is distracted driving caused by cellphone usage. She joined express lanes operator Transurban and local police in urging people to put the phone down while driving.

In D.C. a three-strikes bill came up for vote in October that would result in drivers losing their licenses for a period of time and a $200 fine if they are caught using a handheld device or texting behind the wheel three times in 18 months.

AAA Mid-Atlantic said that distracted driving can be a very deadly behavior and is the cause of 16 percent of fatal crashes. 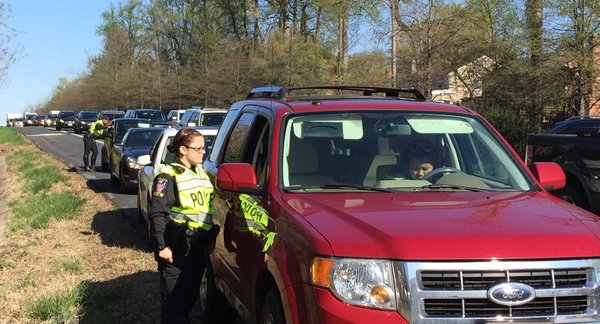 Montgomery Co. police step up efforts to crack down on distracted driving