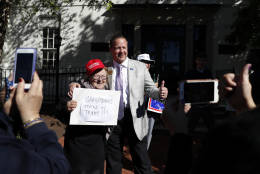 WASHINGTON — The Virginia campaign chair for Republican presidential nominee Donald Trump was fired Monday after he led a protest outside of the Republican Party’s national headquarters on Capitol Hill.

Corey Stewart, who is the chair of the Prince William County Board of Supervisors and is expected to run for governor next year, told WTOP that he was fired after he refused to shut down the protest, which drew more than two dozen Trump supporters. They were calling on party leaders to continue supporting Trump after a wave GOP lawmakers defected from the campaign this weekend.

During the protest, Stewart said he received a note from David Bossie, deputy campaign manager for the Trump team, threatening to fire him if he didn’t end the event.

“I refused to do it so he terminated me,” Stewart said. “I’m loyal to Mr. Trump not to any political operative, especially David Bossie, who is essentially an RNC plant and somebody who’s trying to undermine the campaign.”

Ryan told GOP lawmakers on a conference call on Monday that he would not defend Trump nor appear with the candidate and that he would focus instead on preserving Republican control of the House to serve as a check against a possible Hillary Clinton presidency.

The remarks come after a flood of GOP lawmakers dropped their support for Trump and condemned the lewd comments he made about women in a 2005 video that surfaced on Friday. Among those lawmakers publicly separating from Trump is Virginia Congresswoman Barbara Comstock, who lives in neighboring Fairfax County.

Stewart said he would continue to campaign on behalf of Trump regardless of his official position.

In a statement, Bossie said that “Corey made this decision when he staged a stunt in front of the RNC without the knowledge or the approval of the Trump campaign.”

Women were among those with Stewart outside of the RNC’s D.C. offices. Chanting “Virginia women for Trump,” they held banners and signs supporting their nominee.

They also waved aside the video and Trump’s crass comments.

“If you are committed to this man, you’re not going to allow a little locker banter to interfere with what’s really at stake here,” said Laura Morris of Spotsylvania County, which she said was the economy and jobs.

“With less than a month until Election Day, we can’t afford any distractions.”