Bob McDonnell said he has no plans to get back into politics even after prosecutors last week moved to drop federal corruption charges against the former Virginia governor and his wife.
Listen now to WTOP News WTOP.com | Alexa | Google Home | WTOP App | 103.5 FM

WASHINGTON — Former Virginia Gov. Bob McDonnell has no plans to get back into politics himself, but wants to remain involved in key issues, he told WTOP.

“I do want to continue to speak about the important issues of the day, like federalism,” McDonnell said in an interview following word that prosecutors would be dropping the corruption case against him. “I think an overbearing and sometimes over-burdensome federal government is responsible for a national debt and some other overreach in certain areas.”

McDonnell said he also wanted to focus on improving civility in government, “so we can solve problems and not just argue, so I think there’ll be a good role for me outside of government, and I’m ready to serve the best that I can.”

McDonnell said he plans to vote for Donald Trump.

‘I can be of greater service’ outside politics

He said he does not dwell on the political career that could have been, despite his name being among those in the mix as a potential running mate for Mitt Romney four years ago. “I had no specific goals in that regard,” he said.

“I really did want to smell the roses for a while after an intense 10 years as attorney general and governor and campaigning, so no I really don’t look back at all,” McDonnell said. “I’m enjoying the private sector, and I do think, again, that from the outside of politics away from the polls and the photographs and all those things I can be of greater service by being a little bit more reflective on sort of the big picture of what we need to accomplish to keep America great — and that’s what I’m going to do.”

McDonnell added: “Twenty-two years is a long run and, after having the job held by Thomas Jefferson — that’s governor of Virginia — there wasn’t a lot that I really thought that I would be interested in doing in the future.”

He and his wife, Maureen, went from the governor’s mansion to facing felony charges within two weeks. After they were convicted two years ago, they were allowed to remain free during their appeals. Eventually, the U.S. Supreme Court overturned McDonnell’s convictions in June, and the Justice Department moved last week to drop all charges.

“Suffering teaches you more about life than success does, and I’ve had a chance to look back at everything I’ve done, good and bad, as governor and for all the years of my life, which will allow me to be a better person,” McDonnell said.

‘In my heart, I knew I did not violate the law’

McDonnell has now started a business consulting company in the Hampton Roads area, the McDonnell Group, with his sister and is hoping some friends will help pay off millions in legal bills for a prosecution that he believes stretched the law.

He added: “Never, ever would I do anything that would violate the trust of the people of Virginia,” he said.

At the same time, he pointed to “wide open gift laws” in Virginia at the time and acknowledged “with this one particular donor, there were certainly just too many gifts to my family that could create an appearance of impropriety,” a reference to Virginia businessman Jonnie Williams.

Reflecting on his decision to take $175,000 in gifts and loans from Williams, who he said he thought was a friend, McDonnell said: “I should have just used a bank.”

“I want the people of Virginia to know that I would never and have never betrayed the trust of my office,” he reiterated. “The government really created somewhat of a false narrative in that there was never a conspiracy between my wife and I to do favors for a donor. There was never any quid pro quo. There was never any benefit received by Jonnie Williams or Star Scientific, they simply had meetings. And I tried to comply at every step with all the Virginia reporting laws and did except for a few rounds of golf that were missed on a disclosure”

McDonnell said has not spoken to Williams, who then was the head of a company attempting to market and launch a tobacco-based nutritional supplement, since the day the criminal investigation became public.

“I knew in my heart that I was not doing anything for him that wouldn’t be done for hundreds of other people, in fact hadn’t been done for thousands of people,” McDonnell said.

Setting up meetings, making referrals, “inviting people to cocktail parties,” were all routinely done for Virginia business leaders, he said. “And so never did I think that there was anything improper … Mr. Williams never got anything from state government, and I think that’s why we got vindication from the court,” McDonnell said.

McDonnell on what’s next in ‘the fourth quarter of life’

McDonnell said he would advise other elected leaders to be more thoughtful about the number and size of gifts they accept, even with some new limits in Virginia over the last few years that mainly apply to specific large gifts from lobbyists.

In the last 18 months, McDonnell’s family has grown to include four young grandchildren. He just recently had overnight baby-sitting duties for the first time, and joked that his daughter hasn’t fired him yet.

Ultimately, he said he hopes to move forward by spending more time with his expanded family and by having a positive impact on the community after long reflection on how he got to this point.

“For an average, middle-class kid from Fairfax County like me to grow up to have the job as governor is beyond my dreams that have come true,” he said.

Now at age 62, which he called “the fourth quarter of life,” McDonnell said his guiding principle is the golden rule and “doing what I can to serve God and serve my neighbor in a different way,” which includes charity work and building his new business.

“After the heartache that I’ve been through from this period of suffering, I think that I have a story of encouragement about overcoming adversity and heartache through faith, through intense friendships, through keeping a positive attitude, to never being bitter or angry with people that might be doing something unjust towards you,” he said. “And so I think that’s a good part of what I’ll do in the future and I can do that outside of elected office.” 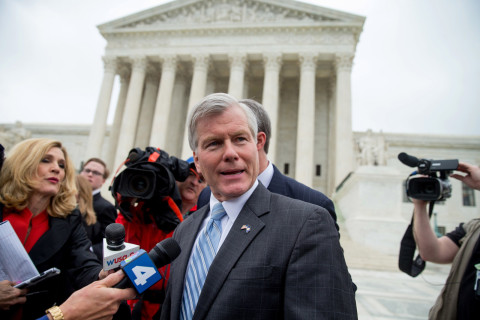