There's a growing concern among conservationists in the D.C. region as more and more bald eagles are experiencing lead poisoning. They say it is due, in part, to the resurgence of the species.
Listen now to WTOP News WTOP.com | Alexa | Google Home | WTOP App | 103.5 FM
(1/3) 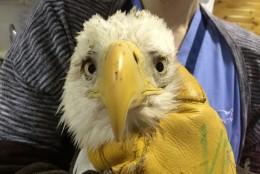 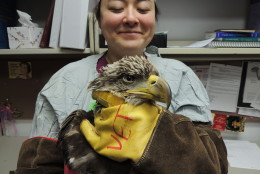 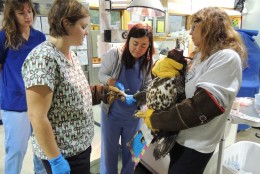 WASHINGTON — There’s a growing concern among conservationists in the D.C. region as more and more bald eagles are experiencing lead poisoning. They say it is due, in part, to the resurgence of the species.

It’s not deliberately done by sport hunters, says Edward Clark of the Wildlife Center of Virginia, but bald eagles scavenging for food are ingesting lead bullets.

“In 2014, we admitted 42 bald eagles. Eighty percent of those birds had measurable amount of lead in their blood stream,” Clark says.

Even a shard the size of a grain of rice can cause the bird’s organs to shut down, he says. Typically, eagles in the mid-Atlantic range in size but grow no larger than 15 pounds.

“When the birds ingest the lead, it has a very damaging effect on their nervous system. So it causes them to lose sight. It causes their reflexes to go off normal perimeters and dramatically effects internal organs and causes them to shut down,” Clark says.

While the birds are naturally fish eaters and live along waterways, such as the Chesapeake Bay, both an increase in population and more human development is forcing the birds to find alternative habitats.

“So these birds are moving away from the rivers, moving inland … to a habitat that’s not quite prime, and as a result, they have to change their food source,” Clark says.

He doesn’t feel that there needs to be any legislation or fines for sportsmen who he thinks do not realize they are harming bald eagles.

“Its’ a matter of educating hunters that the ammunition they choose has profound consequences not only for their quarry, but for unintended victims like bald eagles.”