Metro removes hundreds of rail cars; no timeline for return

Metro removed all of its 3000-Series cars Tuesday after a report of a door malfunction, reducing the number of rail cars by 15%, the transit agency said.
Listen now to WTOP News WTOP.com | Alexa | Google Home | WTOP App | 103.5 FM

Metro temporarily removed all of its 3000-series cars Tuesday after a report of a door malfunction, reducing the number of rail cars by 15%, the transit agency said.

The reduction means commuters may wait longer for trains and will see more six-car trains, rather than eight-car trains.

Metro pulled more than 200 rail cars as a precaution as it investigated a report that a door slid open on the Orange Line last weekend.

At a news conference Tuesday, Metro General Manager Paul Wiedefeld didn’t give a timeline for any return to service of the 3000-Series cars, saying that with the shutdown of the Blue and Yellow lines south of Reagan National Airport, he saw no problem holding the cars out of service into next week.

He said the morning rush went well – there were fewer eight-car trains, and the Red Line turned around at Grosvenor. For the afternoon, trains will run all the way to Shady Grove as usual, he said.

Wiedefeld said Metro staff first saw video of the train door open after a rider posted it on social media at about 4 p.m. Monday. They confirmed with Metro cameras at Dunn Loring.

He said he pulled the fleet because staff wasn’t able to identify a cause of the problem.

Wiedefeld couldn’t say why the safety system, with automatic notification and braking, didn’t kick in immediately when the door opened; that’s under investigation as well as the problem itself. Ideally, he said, a rider would have used the intercom to tell the driver of the train.

In a 7 a.m. tweet, Metro apologized, but added, “Your safety is our highest priority.”

As a result, you may notice more 6-car (vs 8-car) trains. We have also resumed Grosvenor turnbacks, making 32 addl cars available. Every effort will be made to keep normal train intervals. Apologies for any inconvenience. Your safety is our highest priority. #wmata (2/2)

The Metrorail Safety Commission said it has been in close contact with Metro since the rail cars were pulled and supports the move.

In a tweet, it said it has a rail specialist at the West Falls Church car maintenance facility participating in the review of the cars.

2/The MWSC has a rail vehicle specialist at WMATA’s West Falls Church car maintenance facility participating in the examination of the railcars that were involved in the incident. #wmata

Metro’s 3000-series cars, which have been refurbished, were put into service in the mid-1980s.

Last October, Metro said it had retired its 5000-series cars and replaced them with the 7000-series.

The removal of the cars comes less than a week before Metro shuts down six stations on the Blue and Yellow Lines. The Braddock Road, King Street-Old Town, Eisenhower Avenue, Van Dorn Street, Huntington and Franconia-Springfield stations will be closed starting May 25 through Sept. 8. 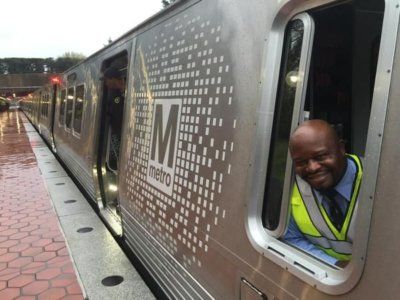