Metro ridership continues to decline across all times of day and days of the week, according to new Metro data. The number of average weekday rail riders is down 9 percent, and bus ridership dropped by 4 percent. That's even with the near record-setting ridership for January's Women's March.
Listen now to WTOP News WTOP.com | Alexa | Google Home | WTOP App | 103.5 FM

WASHINGTON — Metro ridership continues to decline across all times of day and days of the week, according to documents to be presented Thursday to the Metro Board of Directors.

Average weekday rail ridership is down 9 percent, or 12.9 million trips, in the first three months of the year compared to the same period in 2016.

That decline has dragged down bus ridership too, since Metro attributes about 75 percent of the 4 percent decline in bus ridership this quarter to the departure of riders who used the bus to transfer to or from the rail system. Those riders had made up about a quarter of all bus trips.

For the period from July through March, combined rail and bus ridership is down 7 percent compared to a year earlier, which is 11 percent lower than Metro’s budget had projected. 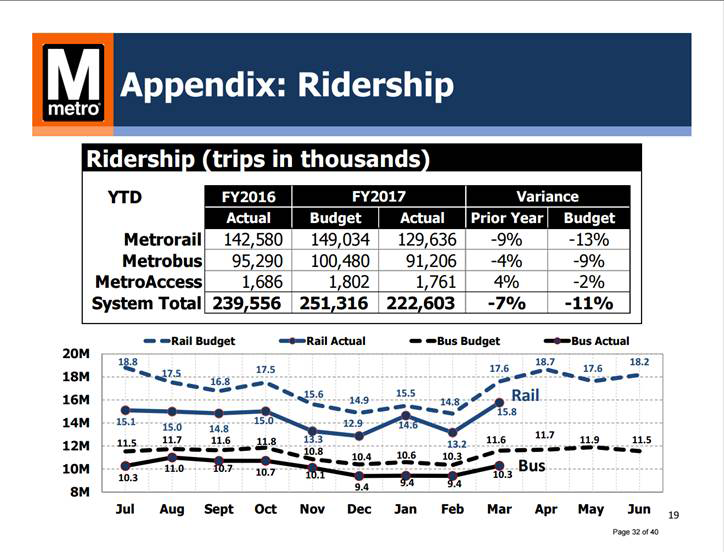 “Service disruptions due to the SafeTrack program have affected rail and bus ridership in many corridors, and overall ridership continues to face service reliability challenges as well as the impact of alternative transportation options, low gasoline prices, and telecommuting. Revenues are below budget by $87 million year to date,” the board documents stated.

The round-the-clock work zones have helped Metro cut costs too, though, and Metro does not expect any additional local tax dollars will be needed before June 30. By scheduling fewer trains across the system during work zones, Metro has lowered costs ranging from the workers who operate the trains to the power that propels them.

“Propulsion expenses were below budget by $2.8 million or 7.4 percent. This favorable volume utilization is mainly driven by lower service levels during SafeTrack,” the documents stated.

The ridership numbers would look even worse were it not for the Women’s March this year and the complete shutdowns of the system last January following a major blizzard and last March following significant cable fires.

“Rail and bus ridership increased 14 percent over the prior year in January. However, the declines experienced in the first half of the fiscal year returned in February and March,” the documents stated.

The January bump contributed to the January-to-March ridership decline coming in at 9 percent compared to the same time a year earlier, slightly better than the 12 percent year-to-year decline Metro saw in the October-to-December time frame when there were more days with significant 24/7 work zones in place.

With the topsy-turvy weather in March changing cherry blossom bloom expectations, Metro said it did not see its traditional bump in ridership for the Cherry Blossom Festival this year.