WASHINGTON — It was a rough Thursday morning to ride the Red Line.

Regular service on the Red Line was restored about 11 a.m. Thursday following repeated suspensions and single tracking after smoke was reported in the tunnel between Farragut North and Judiciary Square stations.

Service was initially suspended for several hours between Dupont Circle and Gallery Place beginning around 7:30 a.m. Some service was temporarily restored about 8:50 a.m. after D.C. Fire and EMS investigated. Trains shared a single track between Farragut North and Judiciary Square.

Then about 10:20 a.m., Red Line service was halted once again for track repairs.

About a half-hour later, Metro said it had completed the repairs and resumed service, however the Red Line was single tracking between Farragut North and Judiciary Square. 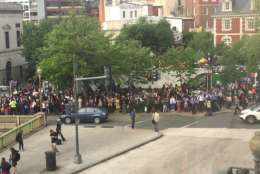 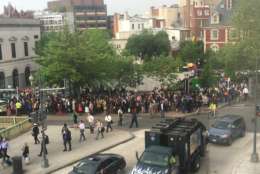 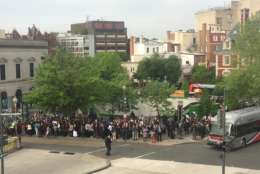 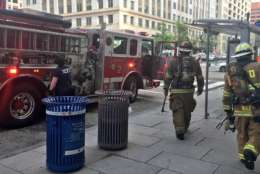 The smoke in the tunnel was described as a “light haze.” No injuries were reported.

The temporary shutdown snarled the morning commute for many and huge crowds formed outside of thee Dupont Circle Station.

Riders at Gallery Place tried to pack into shuttle buses provided by Metro. Tourists at the Red Line station were thrown for a loop and hunted down additional Metro staff for help.

The Blue, Orange and Silver lines were not affected at Metro Center, officials said, but shuttle service was in place for affected Red Line riders.

We are currently working with @wmata investigating report of possible smoke in tunnel between Metro Center & Farragut North Stations. pic.twitter.com/xfoyVZsfrQ

Metro has been plagued by track fires and safety concerns in recent years.

Data collected during the first three months of 2017 showed that the number of track fires held steady — or in some cases, trended higher.

Metrorail’s official Twitter account spent much of the morning apologizing to customers and asking for their input.

@KristinSclafani We do apologize for the crowded conditions this morning. We are currently working to get full service restored.

Switching up travel patterns? Metro is inquiring about plans for returning to work