A rocket launch from NASA's Wallops Flight Facility in Virginia should be visible in the D.C. area Saturday. Find out when.
Listen now to WTOP News WTOP.com | Alexa | Google Home | WTOP App | 103.5 FM

There’s a lot going on in the skies right now, as NASA prepares for a rocket launch and NORAD keeps an eye on a rocket tumbling out of orbit — with no clear indication yet of where exactly it will come down.

Dr. Edward Murphy, University of Virginia Astronomy Professor, provided me a very tantalizing update on the out of control Chinese rocket body’s re-entry.

“NORAD has been tracking the rocket, and is currently predicting that it will reenter this evening, Saturday, May 8, at 11:22 p.m. plus or minus four hours!” Murphy said. “About one orbit after the predicted reentry time, the rocket’s orbit will carry it over Virginia.”

The pass is expected to take place around 12:50 a.m. on Sunday morning, but there is still some uncertainty if it will hit this reentry window, according to Murphy.

“If the rocket decays one orbit later than the current prediction, there is a chance we will see it,” Murphy said. “The rocket itself will be in darkness but will be visible as it reenters because it heats the air in front of it through compression and friction.”

Murphy said the rocket could arrive significantly earlier or later than that 12:50 a.m. window.

NASA’s Wallops Flight Facility is scheduled to launch a four-stage sounding rocket that will be visible to the D.C. area as it climbs into the sunset sky Saturday night.

The 40-minute launch window opens at 8:02 p.m., a few minutes before sunset. Backup launch dates are available until May 16.

The facility said it hopes to launch a Black Brant XII rocket on a suborbital mission to explore energy transport in space that will include the release of barium vapor.

NASA Wallops advises that the vapor will be released about 9.5 to 10 minutes after launch, and that “The barium vapor is not harmful to the environment or public health.”

This barium release will form two green-violet clouds that “may be visible in the DMV (for about 30 seconds),” Keith Koehler, of the Wallops Flight Facility, said in a telephone interview.

“Winds on Saturday could be a concern, and a weather brief before the launch will determine if the launch can proceed,” he added.

Koehler said interested viewers can check for updates on the facility’s Twitter and Facebook accounts. The Visitor’s Center, grounds and Launch Viewing area are closed to the public due to the coronavirus pandemic.

Mission coverage will be carried live by Wallops TV starting at 7:40 p.m.

Depending on where you are in the D.C. area, you might be able watch the rocket ascending into the sky and see the barium clouds with your own eyes.

The visibility map for our area covers quite a bit of territory. Locate where you live on the map and wait the estimated time after confirmed launch to start looking toward the sky. You will need a clear horizon, free of trees and buildings, to get the best view.

You will want to look along a line of sight from your location that aligns with Bermuda — a southeasterly direction for the people in the D.C. area.

If you have binoculars, use them for a better view after you spot the rocket.

Dr. Edward Murphy, University of Virginia Astronomy Professor, informed me in an email that this evening from 9:31 to 9:34 p.m. recently launched SpaceX Starlink Satellites will be passing high in the southwestern sky. He advises “to go outside about 9:25 p.m. to allow your eyes to get dark-adapted. Look just below the two moderately bright stars Castor and Pollux in Gemini and watch for the train of satellites. In the middle of the pass, they will stretch from horizon to horizon! Their brightness varies greatly depending on the angle of sunlight and the orientation of the satellites. They may be bright and obvious, or they may be faint.”

Your best bet to see the satellites is to avoid bright lights and have a clear view of the sky. The viewing time is for Central Virginia but will not vary much for the DMV.

Other sights in May’s skies

May has other amazing sky sights to offer. The planets Mercury and Venus are visible in the west-northwest sky 30 minutes after sunset, with the very young waxing crescent Moon passing by Venus on May 12 and Mercury on May 13.

And don’t miss the very close grouping of bright Venus and Mercury on May 28, when they will be less than a degree apart. Binoculars will enhance your search and view.

Unfortunately for the D.C. area, we will only get a possible glimpse of the Earth’s shadow, as the eclipse will be occurring just before moonset and sunrise.

Looking in the southwest at 5:45 a.m. with binoculars is your best bet to hopefully see a portion of the partial eclipse phase.

Follow my Twitter and daily blog to keep up with the latest news in astronomy and space exploration. You can email me at skyguyinva@gmail.com. 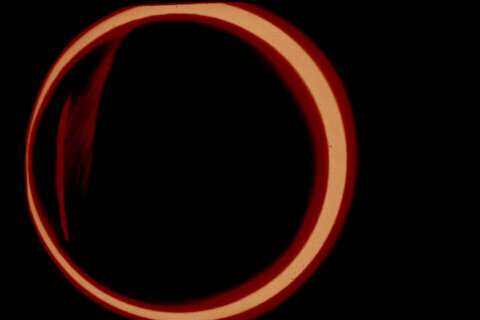 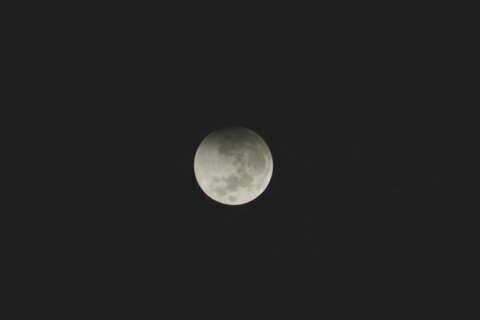 The Space Place: ‘Supermoon’ event won’t be that super around DC