As Roger Federer retires, an appreciation of his career 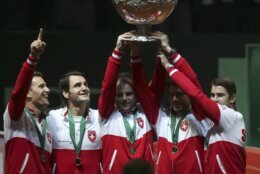 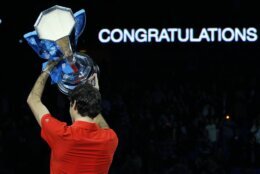 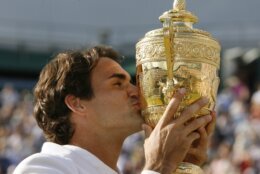 He played tennis with a style that only rarely betrayed the effort behind the masterful serving, the rare-in-its-day attacking and the flawless footwork. He was not one to grunt loudly on shots or celebrate wildly after them.

The way he wielded a racket helped him to win, yes, and win a lot, to the tune of 20 Grand Slam championships — a half-dozen more than any man before him — across a 15-year stretch, and 103 tournament titles in all, plus a Davis Cup trophy and Olympic medals for Switzerland, and spend week after week at No. 1 in the rankings. It also helped him manage to avoid serious injuries for so long and achieve the consistent excellence over decades he prized.

“Every time people write me off, or try to write me off, I’m able to bounce back,” Federer once said in an interview with The Associated Press. On Thursday, at a little more than a month past his 41st birthday and after a series of knee operations, he announced that there would be no more comebacks.

It is a loss for tennis, to be sure, and a loss for the sports world. The news arrives less than two weeks after Serena Williams, who owns 23 Grand Slam singles titles, played what she indicated would be the last match of her own illustrious career shortly before she turns 41.

“Some depart, others come and the world keeps going,” one of Federer’s great rivals, Rafael Nadal, said recently. “It’s a natural cycle.”

OK, the world will keep going. But tennis will not be the same.

Not without Williams, who was feted at the just-concluded U.S. Open. And not without Federer, whose last tournament came last year at Wimbledon, and whose final appearance on court will be next week in London at the Laver Cup, a team event his management group founded.

Tennis will miss Federer, the player. And Federer, the statesman and ambassador who spoke several languages. And Federer, the instantly recognizable global pitchman who brought his sport to places all over the world that didn’t even have tournaments through exhibitions to raise money for his charitable foundation.

Once a tantrum-throwing kid — on the court and off, where he would overturn a chess table when losing to his father — who grew up admiring basketball stars such as Michael Jordan and soccer players more than tennis players, Federer became a symbol of his sport and someone known as much for the way he carried himself as the hardware he accumulated.

“He was the epitome of a champion; class, grace, humility, beloved by everyone,” Hall of Famer Chris Evert wrote on Twitter.

He became friends with Vogue editor Anna Wintour and showed up at the Met Gala. He had a special jacket with a gold “15” on it to don right there on Centre Court after winning Wimbledon in 2009 to break Pete Sampras’ men’s mark of 14 career major trophies. He kept playing, and winning, well past an age that is customary for that sort of thing in tennis, to the point that his two sets of twins — now ages 13 and 8 — eventually were able to be present in courtside guest boxes. He returned after left knee surgery in 2016, the first significant absence of his career, and used a larger racket head and a rebuilt backhand to collect his last three Slams.

When it came to defining success, Federer cared about longevity as much as anything. He was proud of facing — and defeating — stars from an earlier generation (Sampras and Andre Agassi), from his own generation (Andy Roddick, Lleyton Hewitt, Marat Safin), from the next generation (Rafael Nadal, Novak Djokovic, Andy Murray, Stan Wawrinka) and from the current crop (Daniil Medvedev, Stefanos Tsitsipas).

He chased the first group, dominated the second, dueled with the third — Nadal, with 22, and Djokovic with 21, eventually surpassed Federer’s Grand Slam total — and set an example for the fourth.

Aside from those major trophies won from 2003 to 2018, Federer put together unprecedented stretches of elite play, appearing in 10 consecutive Grand Slam finals (and 18 of 19), along with 23 semifinals and 36 quarterfinals in a row.

His contests against Nadal, now 36, and Djokovic, 35, were happenings, tantalizing matchups against a backdrop of differing ways of play and contrasting personalities.

“I was lucky enough to play so many epic matches that I will never forget,” Federer wrote in the section of his goodbye post addressed to his competitors. “We battled fairly, with passion and intensity, and I always tried my best to respect the history of the game. I feel extremely grateful. We pushed each other, and together we took tennis to new levels.”

Predicted to be a star from the time he won the Wimbledon junior title as a teenager — a sentiment that only built when he stunned Sampras in the fourth round there in 2001 — it took Federer a little time to get pointed in the right direction: He did not win a quarterfinal match in his first 16 Grand Slam appearances.

There were six first-round exits in that span, including at the 2003 French Open. So then came this concern: Might Federer not quite be as good as he, and others, thought?

It all came together at Wimbledon that year, where Federer claimed his first Grand Slam title at the tournament that always meant the most to him. And off he went.

“There was pressure from all sides; also from myself. I wanted to do better in Slams,” Federer said that day. “I’ve always believed, but then in the end, when it happens, you don’t think that it is possible. It’s an absolute dream for me. I was always joking around when I was a boy: ’I’m going to win this.’”

He would end up with those men’s-record eight at Wimbledon, plus six at the Australian Open, five at the U.S. Open and one at the French Open. He is one of eight men with a career Grand Slam, holds the records for most consecutive weeks at No. 1 in the ATP computerized rankings and for oldest to get there, and set a mark for most total weeks that Djokovic eclipsed.

If anyone worried that Federer is gone for good, one of those athletes who wants to disappear after the playing days are done, he concluded his farewell note with these words: “To the game of tennis: I love you and will never leave you.”