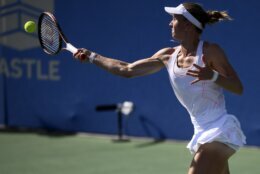 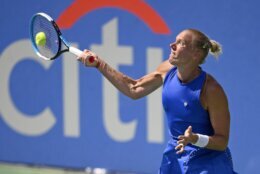 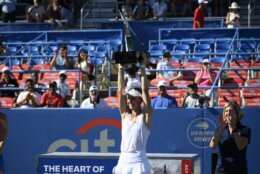 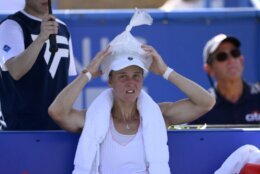 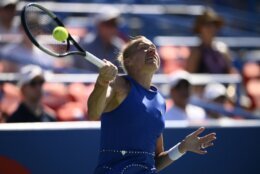 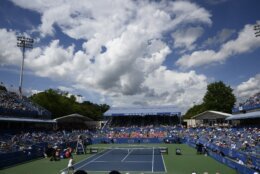 Samsonova is a 23-year-old Russian currently ranked 60th after needing to sit out part of the season, including Wimbledon, because of her country’s invasion of Ukraine. She used a powerful serve that reached 119 mph against Kanepi to make her way through the bracket at the hard-court tournament, including a victory over reigning U.S. Open champion Emma Raducanu.

Samsonova’s other championship came last year at a grass-court tournament in Berlin. Kanepi, a 37-year-old from Estonia, was seeking her fifth trophy and first since 2013. She faded on Sunday after taking the first set and left the court for a medical timeout late in the second set during a five-game run for Samsonova.

The men’s final at the U.S. Open tuneup event was to follow, pitting Wimbledon runner-up Nick Kyrgios against Yoshihito Nishioka. Kyrgios was the 2019 champion in Washington. That final was scheduled to be shown on Tennis Channel, which shunted the women’s final off its main station and instead aired pickleball.

Both women are quite capable of terrific serving and showed so right away: Kanepi closed out her first service game with a 96 mph ace; Samsonova finished off hers with a 112 mph service winner.

When Samsonova delivered an ace at 113 mph to hold for 4-all, the match was 25 minutes old, and neither player had generated a break point. By the end, Samsonova had won 35 of 43 first-serve points.

This was big-serve, quick-strike tennis between a pair of women with similar playing styles on a humid, 90-degree Fahrenheit (32 Celsius) afternoon not all that conducive to lengthy exchanges or a lot of running. Some spectators held umbrellas to provide shade; portable electric fans were placed next to sideline seats to offer a bit of respite to Kanepi and Samsanova during changeovers.

Kanepi finally found an opening and barged through while ahead 5-4 at the outset. Right after smacking a 119 mph ace, Samsonova gifted two unforced errors off backhands — one into the net, the other wide — to offer up the match’s initial break point and, as it happened, a set point. Kanepi handled the ensuing 117 mph serve, sending it deep and rushing Samsonova, whose wild forehand ended that set.

In the second, Kanepi got a chance to go up a break at 3-2, but Samsonova saved that with a 107 mph service winner, tacked on a 119 mph service winner and ended up holding. Then Samsonova earned her first break opportunity of the match, an hour in, when Kanepi dumped a forehand into the net. Samsonova converted it and went ahead 4-3 when Kanepi sailed a backhand long.

Kanepi’s mistakes kept mounting and, suddenly, the second set belonged to Samsonova. Helped by a double-fault, Samsonova broke to lead 5-3 in the third, then served it out.