The Best Time to Buy a Computer

With the winter holidays around the corner, you may be looking to buy a new computer. And if you think…
Listen now to WTOP News WTOP.com | Alexa | Google Home | WTOP App | 103.5 FM

With the winter holidays around the corner, you may be looking to buy a new computer. And if you think now is the best time to make that purchase, you would be right.

That’s for two reasons: One, the holidays are on the horizon. With the upcoming shopping holidays and promotions such as Black Friday, Small Business Saturday and Cyber Monday as well as numerous other sales throughout December, it is a smart time to buy a laptop, a desktop computer or a tablet to maximize savings. That said, there are other times throughout the year that can be advantageous if you’re on a budget.

Reason No. 2: Supply chain problems will continue to impact consumers. Especially if you’re buying a computer as a gift, it’s probably safer to order one now or buy in the store while they’re on the shelves rather than wait until closer to the holidays when your options may be far more limited.

In any case, if you’re in the market for a new computer, read on for suggestions and the best times of year that may help you score the best price.

[READ: The Best Time to Buy Everything.]

The Best Time to Buy a Computer

There are exceptions, but as a general rule, the best times of the year to buy a computer are Black Friday, Cyber Monday, three-day weekends like Presidents Day weekend, Amazon Prime Day and back-to-school season. Black Friday, in particular, is a beneficial time to save. This year, Black Friday falls on Nov. 26, and unlike in years past, most retailers will be closed on Thanksgiving. So you might actually get to have a Black Friday shopping experience like the days of yore — and not shop on Thanksgiving Day but instead wake up early the next morning and brave the crowds.

For discounts for laptops and desktop computers, shop Black Friday sales. With the pandemic-affected supply chain issues, though, it’s hard to say if the deals will be as eye-popping in the past, but there should be deals to be had.

Meanwhile, Small Business Saturday, on Nov. 27, is always an advantageous day to shop at independent mom-and-pop stores. And Cyber Monday on Nov. 29 is an ideal time to capitalize on steep discounts from online retailers.

January is also a prime time to snag a bargain. “If you are able to be flexible in your requirements, the best overall prices are in January, during post-holiday shopping efforts to clear inventory,” says Diana Brown, a technology director for the Puget Sound Education Service District in Seattle. Brown’s job involves buying a lot of computers — and getting the best prices for them. She oversees technology purchases, implementation and operations for the agency and works with multiple entities in school districts and at the state level to make sure that when computers are purchased, schools are getting the best return on their investment.

Often, Brown says, you’ll find computers in January at prices 10% lower than on the same models that were sold in December.

Another great time to land a bargain is during holiday weekends throughout the year, including Presidents Day weekend, Memorial Day weekend and Labor Day weekend. Amazon Prime Day, typically held in the summer, is another good time to secure deep discounts on laptops and computers in addition to back-to-school season . Many children and college students are in the market for computers at this time, and so that’s a good time to find deals, especially if your state has a sales-tax-free weekend in the summer to encourage shoppers to open their wallets. Earlier this year, at least 11 states held sales tax holidays in the summer to encourage back-to-school shoppers to spend — and seven of those states singled out computers as merchandise that shouldn’t be taxed.

That said, while tax holidays can be an advantageous time for students and adults to buy a desktop or laptop, there are sometimes limits on how much the computer can cost to avoid sales tax. You may get a sales tax holiday on a $1,000 laptop but not a $3,000 desktop, for instance.

The Best Times to Buy an Apple Computer

When shopping for a new computer, prioritize what you’re looking for: Do you want the best price or the newest product? While you can find discounts for desktop and laptop computers during the holidays for all brands, you may want to buy an Apple computer at a different time if the goal is to get the lowest price. In other words, if a new Apple product comes out, you’ll want to look at what the new desktop or laptop replaced. You may want to buy an older version, which is likely to be offered at a steep discount.

As for the best time to buy an Apple desktop or laptop, Brown suggests typical shopping holidays and holiday weekends. That said, she says she has had particular luck getting good deals on Apple laptops and desktops during Black Friday.

The Best Times to Buy a Microsoft Computer

If you’re interested in a Microsoft laptop, it’s best to stick to shopping holidays and the aforementioned times of year. Brown says that if you don’t end up buying a desktop or laptop during the holidays, you’ll have plenty of other chances to get a good deal.

“For those with the patience, or who are planning ahead, Amazon Prime Day is also becoming a force in sales. Other vendors match prices or plan sales of their own to capitalize on the shopping frenzy,” Brown says.

Factors to Consider When Buying a Computer

While timing is important when it comes to scoring a good deal, you’ll want to think beyond the date you make a purchase. Take the following considerations into account before you buy.

Price. Dan Gudema, a Boca Raton, Florida, software developer and founder of SEO Turbo Booster, says that the bigger your family, the better the odds that you should not purchase a new computer every time you need to buy one. “We don’t believe it is necessary to buy new computers and often an upgrade is all you need to take what you have and make it work better,” Gudema says.

Gudema and his wife have two sons, ages 11 and 13. In total, they have five computers; two are Gudema’s for work. Sometimes, they’ll purchase new computers, but Gudema has had luck buying used computers off of Craigslist. If you’re interested in buying used Apple products that have been tested by Apple and come with a one-year warranty, check out the “refurbished” section on Apple.com.

Brown says that used Apple computers and desktops are often a great deal. “Like comparably priced PCs, Apple hardware is high-end and has a long life. For this reason, refurbs from the Apple store site can be a great option,” she says.

Gudema also often purchases refurbished computers or open-box computers, which simply means the customer returned the computer in the box, but the computer has been inspected. Often, you’ll get a pretty decent discount — say, 20% — but you’ll want to make sure there’s a warranty available before you buy an open-box computer. Gudema also points out that if you buy computers online, it’s often cheaper than buying them in person at the store. He purchased both of his sons’ personal computers on Best Buy’s website.

In any case, Gudema says that with young children, cheaper is often a smart way to go. “Trust me, making a major investment with kids who destroy things is not a great thing to do. What is most important for us is making sure we are all satisfied,” he says.

Gudema also says that it’s important to remember that you may be able to fix a problematic computer yourself and save money.

“Recently we ran into an issue where one of the PCs, a Lenovo, would not boot and would get stuck at a Lenovo Boot Screen,” Gudema says. “I took the PC to Best Buy, where we purchased it and had them look at it. They wanted to charge me $199 to join their service club to fix it. I realized, I had spent no more than $300 buying the computer in the first place, so I’d rather try to fix it myself before forking over the money.”

He figured the worst-case scenario was that they would buy another used or open box computer.

“So I took it home and used a USB Windows recovery boot drive from the other Lenovo and reinstalled Windows. Problem solved and saved $199,” Gudema says.

[Read: The Best Times of the Year to Buy Large Appliances.]

Features. If you buy a cheap computer that doesn’t work for you, you’ll end up wasting a lot of money. If you’re a serious gamer or are running a business, you might want to opt for buying a computer from a company that builds computers on demand.

Tim Lynch, owner of Psychsoftpc, an artisanal computer hardware manufacturer based out of Quincy, Massachusetts, says that while “many folks will be satisfied with a cheap machine” at big-box stores and office supply stores, you’re taking a risk. “They will perform OK for internet browsing, word processing, email and the occasional non-complex spreadsheet, but will struggle to handle gaming, video streaming and will find virtual reality an impossibility,” Lynch says. He says that with 64-bit operating systems, even the cheap machines should have at least 8 gigabytes of RAM.

Lynch also points out that with more people than ever working at home and doing more sophisticated and complex tasks, cheap computers often simply aren’t up to the job.

Both Lynch and Gudema say that if you see a computer with 4 gigabytes, it’s extremely cheap, and you should steer clear. Brown agrees that 8 gigabytes should be your minimum. “If you tend to keep lots of programs open at the same time, or lots of web browser windows, more memory will reduce the amount of time you spend waiting to switch between them or load new ones,” she says.

The Best Times of the Year to Buy Large Appliances

The Best Time to Buy Everything

The Best Time to Buy a Computer originally appeared on usnews.com

Update 11/15/21: This story was published at an earlier date and has been updated with new information. 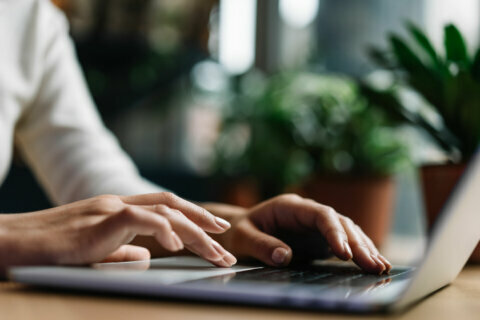