ALTENBERG, Germany (AP) — Kaillie Humphries of the U.S. got a milestone medal Saturday, winning a World Cup women’s monobob race for the 100th top-three finish of her career in major international competition.

Humphries has won 70 medals in two-woman races in her career; 60 in World Cups, seven at the world championships and three at the Olympics. She’s won another 11 medals in monobob events — including Olympic gold at Beijing last year — plus 10 more on the North American Cup circuit and nine medals in team competitions.

Humphries used a blazing second run to finish two heats on Saturday in 1 minute, 57.92 seconds. Germany’s Laura Nolte was second in 1:58.47, and Canada’s Cynthia Appiah was third in 1:58.86. Humphries’ winning margin of 0.55 seconds was the largest in a World Cup monobob race this season.

Humphries got 225 standings points for the win, 15 more than Nolte got for finishing second. That gave Humphries 1,070 points on the season, 50 more than Nolte in the race for the overall monobob title with three races remaining on the World Cup schedule.

Humphries was 0.15 seconds behind Nolte after the first heat. But her second-heat time of 58.97 seconds beat Nolte’s time by seven-tenths of a second — a huge margin in a sliding sport.

Lochner, Hall and Friedrich all have four medals apiece from the five two-man races so far this season. Lochner leads the two-man standings with 1,067 points, now 31 clear of Friedrich — the margin was just six entering Saturday — and 53 ahead of Hall. 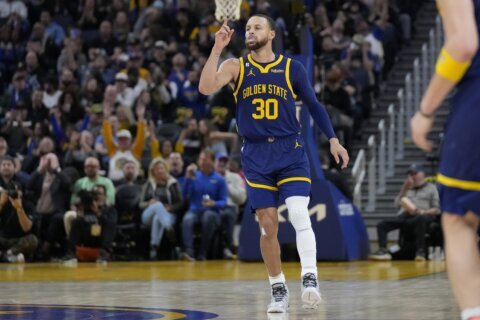