OTTAWA, Ontario (AP) — Anton Forsberg made 22 saves for his second NHL shutout, Tim Stutzle had a goal and an assist and the Ottawa Senators beat the Columbus Blue Jackets 4-0 on Tuesday night.

“I was awful in the first, that’s for sure,” Stutzle said. “We just talked in the intermission that we’ve got to stick with it. We had a couple of bad turnovers here and there, especially our line, but we tried to stick with it, play better in the second period and the third period and I think everyone in here did a great job.”

The 20-year-old Stutzle has five goals in his last six games.

“Tim’s one of those guys who has confidence and makes plays that not a lot of players can make,” teammate Claude Giroux said. “Right now, he’s got confidence so we try to get him the puck and we try to get open for him.”

After a scoreless first period, four minor penalties in the second cost the Blue Jackets, with Ottawa scoring twice on the power play.

“We took four,” Columbus coach Brad Larsen said. “What do you expect is going to happen against a good power play? It’s just silly. They’re all penalties, every single one of them.”

Brassard opened the scoring with a power-play goal after he tipped Jake Sanderson’ shot. Stutzle made it 2-0, grabbing a rolling puck and beating Korpisalo. Batherson followed with Ottawa’s second power-play goal.

Watson scored short-handed into an empty net late in the third.

Messi has doubts about playing 2026 World Cup at age 39 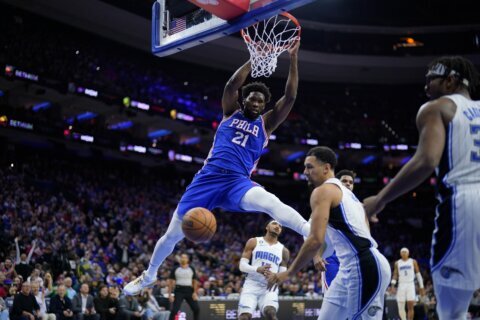