Jack Eichel and Nicolas Roy also scored for Vegas, which has won 12 of 14 this season. William Karlsson had two assists and Logan Thompson stopped 28 shots.

In the extra period, Smith took a breakaway pass from Shea Theodore and roofed a backhand on Kallgren for his seventh of the season. Vegas finished a sweep of the two-game season series, also beating Toronto 3-1 at home on Oct. 24 to start the streak.

“Enjoying every minute of it,” Smith said. “We’re rolling with the punches and finding ways to win.”

Timothy Liljegren scored twice and Mitch Marner had a goal and an assist for Toronto, and Erik Kallgren made 16 saves. The Maple Leafs snapped a three-game win streak, including victories against Boston at home on Saturday and at Carolina on Sunday.

“Tough stretch,” Toronto coach Sheldon Keefe said. “Three games in four nights against three elite teams. Five out of six points feels good. But tonight’s a sign that we’ve still got a ways to go in terms of managing the game, because that should be six points.”

The Maple Leafs trailed 2-1 after 20 minutes, and Kallgren kept them within one in the second period with breakaway stops on Keegan Kolesar, William Carrier and Smith. Marner then tied it with a great individual effort to get his third of the season with 6:10 remaining in the period. It extended his point streak to seven games.

Toronto took its first lead with just over three minutes left as Marner sent a slick no-look ass to Liljegren, and the defenseman got his second of the night — and second of the season.

Marner flipped the puck out of play for a delay-of-game penalty early in the third period, but Kallgren bailed out his teammate with a big stop on Chandler Stephenson.

Toronto got a power play of its own midway through the period, and had its top unit on the ice for 1:21 before a mistake at the offensive blue line led to a 2-on-1 short-handed rush that Smith buried for his sixth of the season with 8:17 to go.

“Got to do a better job of looking up there and keeping fresher guys on the ice,” Marner said. “Especially that time of the game.”

Vegas opened the scoring 45 seconds into the game after Leafs defenseman Rasmus Sandin turned the puck over at the offensive blue line. Carrier had his ensuing breakaway stopped by Kallgren, but the puck trickled through and the hard-charging Roy was there to deposit it for his fourth.

The Leafs responded at 5:05 when Liljegren took a feed from David Kampf to score his first.

However, after Liljegren’s giveaway, Eichel scored his sixth to move the Golden Knights back ahead with 2:05 left in the opening period.

Kallgren has been pressed into action with both Matt Murray and Ilya Samsonov dealing with injuries. Murray is scheduled to take part in Wednesday’s practice — the goaltender’s first on-ice session with the main group since injuring his groin/abductor on Oct. 15.

Samsonov carried the bulk of the load with Murray out, but suffered a knee injury in Saturday’s win against Boston. Toronto coach Sheldon Keefe said Tuesday he is considered week-to-week.

Golden Knights: At Buffalo on Thursday night in the finale of a five-game trip.

Maple Leafs: Host Pittsburgh on Friday night in the second of a three-game homestand. 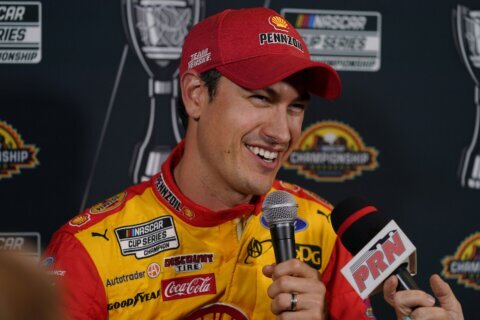