No room for Götze, Hummels in Germany squad before World Cup

BERLIN (AP) — Germany coach Hansi Flick has hinted at his World Cup plans by leaving Mario Götze and Mats Hummels out of his 24-man squad for upcoming Nations League games against Hungary and England.

Flick surprisingly called up Southampton defender Armel Bella-Kotchap for the first time on Thursday, saying the 20-year-old former Bochum center back “has defended well in the Premier League.”

The upcoming games against Hungary in Leipzig on Sept. 23 and England in London three days later will be the last before Flick names his 26-man squad for the World Cup in Qatar, which begins on Nov. 20.

Germany plays Japan in Doha on Nov. 23, four days before it faces Spain in Al Khor, where it also plays its last game in Group E against Costa Rica on Dec. 1.

“We the coaching team are already in World Cup mode,” Flick said Thursday, when he recalled defenders Matthias Ginter and Robin Gosens.

Flick said 2014 tournament winners Götze and Hummels “can still jump on the World Cup train” depending on their performances for Eintracht Frankfurt and Borussia Dortmund, respectively. That also applies to players like Julian Draxler, Jonathan Tah or the injured Lukas Klostermann.

The team is scheduled to gather Monday in Frankfurt to prepare for the upcoming games.

Bayern Munich has seven players in the squad, while Dortmund has four in Marco Reus, Julian Brandt, Niklas Süle and Nico Schlotterbeck. 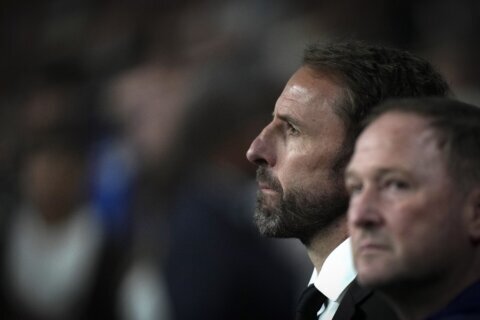