WOLVERHAMPTON, England (AP) — Erling Haaland added a strike from outside the area to his repertoire of goals since joining Manchester City in a 3-0 win at 10-man Wolverhampton in the Premier League on Saturday.

City had already taken the lead through Jack Grealish after 55 seconds at Molineux when Haaland picked up the ball 40 meters out, drove toward the penalty box and shot right-footed into the bottom corner from the edge of the area in the 16th minute.

It was Haaland’s 11th goal in seven league games since his offseason arrival from Borussia Dortmund — with the majority coming from right in front of goal.

“I didn’t know he could score from outside the box,” Grealish said jokingly, while calling Haaland “the best striker in the world playing up front.”

Wolverhampton’s already-slim chances virtually ended when center back Nathan Collins was shown a straight red card for a chest-high lunge on Grealish in the 33rd.

Phil Foden swept in a right-wing cross from Kevin De Bruyne, who provided a similar assist for Grealish’s goal, in the 69th minute to round off a win that took City above Arsenal into first place — at least overnight.

City has scored 23 goals in the first seven games of its title defense — comfortably more than any other team — and Haaland has almost half of them.

On the other hand, Grealish has just the one — and he knows he needs to score more to justify being the most expensive Premier League player ever after joining from Aston Villa for 100 million pounds (then $139 million) in the offseason of 2021.

“Rightly so people have been asking questions — I should be scoring more and getting more assists,” the England international said.

“I am always going to have people talking about me with the money that was spent on me, but all my career I haven’t scored enough goals. I do want to add that to my game.”

City manager Pep Guardiola was particularly happy after the lunchtime kickoff considering the quick turnaround for his team from a Wednesday night game against Dortmund in the Champions League — when Haaland scored, naturally, with a flying volley.

“After the Champions League, a 12:30 (p.m. kickoff), to come to this team, with the quality they have … we did an incredible victory,” Guardiola said. 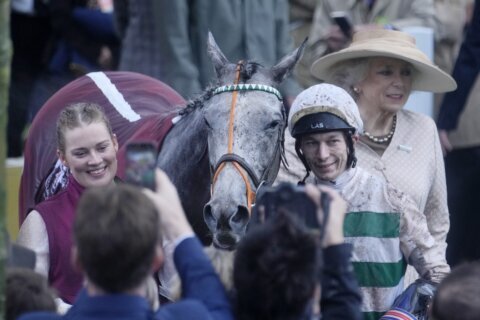