MADRID (AP) — Atlético Madrid’s biggest addition to its squad this season may end up being a player who already belonged to the club.

Álvaro Morata returned from on loan to Juventus and impressed in the offseason, giving hope to Atlético that he could be the player needed by coach Diego Simeone to complete his attack.

Simeone looked in awe on the bench after Morata made a great run and got past two defenders to score one of the goals in his hat trick in the 4-0 win against Juventus in Atlético’s final preseason game on Sunday. Morata had also scored in the 4-1 win over Cádiz as Atlético outscored opponents 13-1 in its four preseason matches. Its other wins came against Manchester United and Numancia.

There had been doubts about whether Atlético would keep Morata or try to transfer him again on loan or even sell the player. Juventus and Manchester United reportedly are among the clubs that still want him, and a transfer has not been completely ruled out yet. But Atlético and Simeone apparently liked what they saw from the 29-year-old striker after his return.

“I’m very motivated,” Morata said. “I’m certain that it will be a great year.”

Morata would help Atlético make up for the departure of veteran Luis Suárez, who did not have his contract renewed. Simeone’s options up front would improve significantly if Morata teams up well with Antoine Griezmann and João Félix, the team’s regular starters last season.

Atlético’s other forwards remain the same as before, with Ángel Correa and Matheus Cunha playing often from the bench. The club brought in Samuel Lino but sent the Brazilian forward to Valencia on loan. Vitolo Machín had already been loaned to Las Palmas.

“There is a lot of competition and I think that’s good for the team,” Morata said. “The more options available in attack, the better it is for the team.”

Morata played in Atletico’s youth system before joining Real Madrid’s academy and eventually helping Madrid win two Champions League titles. He spent two years with Juventus before returning to Madrid and then signing with Chelsea in 2017 for a then club-record fee of about $75 million. He played for Atlético in 2019-20, before his new stint with Juventus.

Morata wants as many minutes as possible early in the season to try to secure a spot in Spain’s squad for the World Cup in Qatar. He has been a regular in Luis Enrique’s squads and looks set to make it if he keeps playing well.

“When it’s a World Cup year, everyone is very motivated from the start to show their coaches that they deserve to be in the World Cup,” Morata said.

Atlético did not make any high-profile signings in the offseason, bringing in Belgium international Axel Witsel to boost the midfield and help in the defense, which struggled unusually last season. Argentine full back Nahuel Molina also was added, and midfielder Saúl Ñíguez returned following his one-year stint on loan with Chelsea.

Atlético has its league opener at Getafe on Monday. It finished third last season after winning the title in 2021.

Sports on TV for Monday, September 26 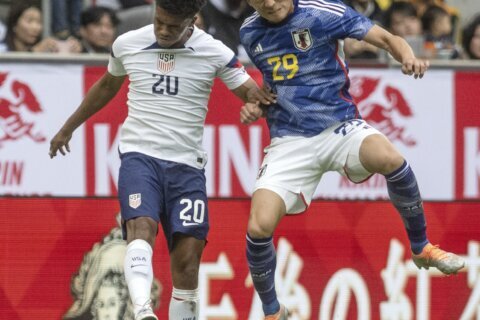