Borussia Mönchengladbach goalkeeper Yann Sommer made a record 19 saves and his team gave the Bundesliga a sliver of hope by holding Bayern Munich to 1-1 on Saturday.

Sommer produced an outstanding game by thwarting attack after attack from the home team. Bayern had 33 attempts at goal and could beat Sommer only once when Leroy Sané finally equalized in the 83rd minute.

Sadio Mané had two goals ruled out for offside as Bayern dominated before Marcus Thuram shocked the home fans with the opener in the 43rd. The French forward capitalized on a mistake from Dayot Upamecano, who completely missed Christoph Kramer’s hopeful punt forward. Thuram raced through and stayed cool to slot the ball past Manuel Neuer in the Bayern goal.

If any team was going to frustrate Bayern – which made the best Bundesliga start ever with 15 goals scored and one conceded in three games – it was bound to be Gladbach, which was unbeaten against Bayern last season and stunned the Bavarian powerhouse with a 5-0 rout in the German Cup.

“It’s just one of those games that all the players look for,” Gladbach’s American defender Joe Scally said before producing another impressive performance.

Bayern coach Julian Nagelsmann was unable to contain his anger and was booked for complaining late in the game.

MODESTE OFF THE MARK

Modeste scored in the 32nd against Hertha, producing a brilliant header to meet former Cologne teammate Salih Özcan’s cross. Turkey midfielder Özcan was making his Dortmund debut following his transfer between the sides.

Karim Adeyemi also started for Dortmund after two games out with a toe injury in his left foot, but there was no place in the squad for a rested Gio Reyna one week after he played against Bremen for his first competitive appearance since April 8.

After scoring, Modeste ran to embrace coach Edin Terzić, and his celebrations belied the pressure he’d been under since he joined from Cologne.

The Dortmund fans were celebrating again early in the second half when news came through of another Union Berlin goal at their bitter rival Schalke.

Jude Bellingham missed several chances to kill the game for Dortmund before Marco Richter struck the crossbar on his comeback for Hertha. The outstanding Kobel got his fingertips to the ball. Richter was making his first appearance since undergoing treatment for a testicular tumor.

Union Berlin was Saturday’s big winner as it routed promoted Schalke 6-1 away for its highest Bundesliga win.

It was also its first victory over the Gelsenkirchen-based club and it ensured Union remained unbeaten in five consecutive away Bundesliga games for the first time.

“We had five chances and we scored six goals,” said goalscorer Janik Haberer, who acknowledged Union’s fortune. “Defensively we weren’t always there, we have to work on it.”

After starting the season with four defeats across all competitions, Bayer Leverkusen finally clicked in beating Mainz 3-0, easing the pressure on Leverkusen coach Gerardo Seoane.

Leipzig also got its first win, 2-0 over visiting Wolfsburg, and Hoffenheim defeated Augsburg 1-0. 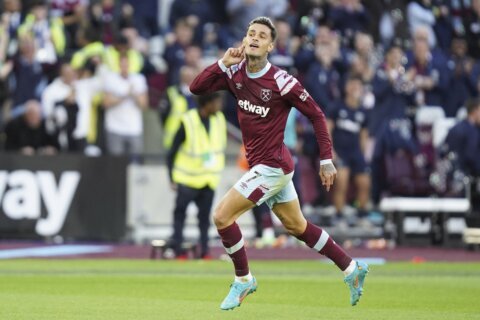 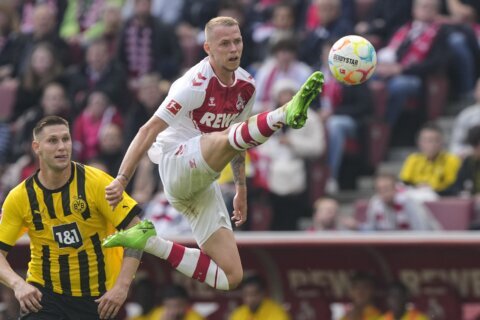