Palou insists he wasn’t lying about being happy at Ganassi

NEWTON, Iowa (AP) — IndyCar champion Alex Palou insisted Friday he wasn’t lying last month when he told The Associated Press he was happy driving for Chip Ganassi Racing, wasn’t talking to any other teams, and was set to return to the No. 10 next season.

Well, something dramatically changed in the four weeks since Palou tried to remove his name from the rumor mill of drivers headed to Arrow McLaren SP next season.

Now both Ganassi and McLaren Racing believe they have the 25-year-old Spaniard under contract for next season in a fight likely to be decided by lawyers. Chip Ganassi last week said he picked up the exclusive option he held on Palou, while McLaren head Zak Brown said he’s signed Palou to drive for him.

Palou told AP on Friday at Iowa Speedway that his c omments made June 3 in Detroit “is not a lie” and he remains content at Ganassi.

So then why does he want to drive for McLaren?

“Opportunities. The future,” Palou said. “I agree with you that I would never have said being a champion and being part of Chip Ganassi Racing, I would ever consider something (else).”

And now Palou, who is in just his third season of IndyCar and second season driving for Ganassi, is doing his best to focus on finishing this season. He heads into the Saturday and Sunday doubleheader at Iowa ranked third in the standings and only 37 points out of the lead in his pursuit of a second consecutive title.

But he’s embroiled in a bizarre situation not seen very often in IndyCar with all his competitors waiting and watching in anticipation to see how Palou’s contract predicament gets settled. McLaren has given no indication it will pay to buy Palou out of his contract with Ganassi because McLaren signed him under the assumption he was a clear free agent.

If Ganassi requires payment to release Palou, the cash would have to come from Palou’s side.

But the situation is so much more complicated than that: Scott Dixon, his teammate and the six-time IndyCar champion, has been openly critical of Palou’s handling of his situation and told AP he didn’t speak to Palou all weekend in Toronto.

Seven-time NASCAR champion Jimmie Johnson said he sent Palou a text ahead of Toronto, but has otherwise been avoiding his IndyCar teammate to stay removed from the drama and tension. Only Indianapolis 500 winner Marcus Ericsson said things have been status quo between him and Palou, and both Palou and Ganassi have acknowledged they’ve yet to speak to each other despite sitting in engineering meetings together last weekend.

And, Palou said Friday that while his communication with the No. 10 crew remains steady, he’s been denied access to team data while at his home.

“I don’t have the access I had before to the data and all that stuff from home,” he said. “When I’m here, I have it. Not from home like the same I had before. Which I understand. It’s normal. I think I’d do the same if it was my team. It changed. But I understand it. It’s not that I’m out of meetings and stuff like that.”

The resolution of Palou’s contract will trigger a domino effect that is currently holding other drivers in limbo. Felix Rosenqvist, for example, doesn’t know if he’ll return to McLaren next year in IndyCar or be shifted to Formula E to make room for Palou.

Rinus VeeKay, in a contract year at Ed Carpenter Racing, doesn’t know if the No. 10 might be open next year. He said Friday he’s in discussions on an extension with Carpenter, but has no idea what other seats might open for next year.

VeeKay was in North Carolina last Tuesday on the Chevrolet simulator when he saw on social media that Palou’s option had been extended. By the time he checked his phone again when he returned home to Florida, Palou had issued a series of tweets refuting his return to Ganassi and McLaren had announced it had signed the driver.

“My whole Uber ride home, my mouth was just hanging open reading my phone,” VeeKay said. “Every driver is reading every article trying to learn more because it’s definitely not your usual situation. I would secretly have to say this is an amusing time.”

So what happens next?

“To be honest, like no lying, I have no idea,” Palou told AP. “I’m going to focus on racing because it’s a lot of noise, and too much. I don’t like noise, I don’t like this kind of stuff. So instead of of trying to understand what’s going on, I’m going to try to do everything perfectly on track and the rest, my (management) is going to sort it out.”

But as everyone waits to see where Palou drives next year — and the McLaren Formula One team is not out of the question — Palou said “yeah” he knows where he will be in 2022.

And where is that? “I’m not going to say what I think. OK? No comment,” he said. 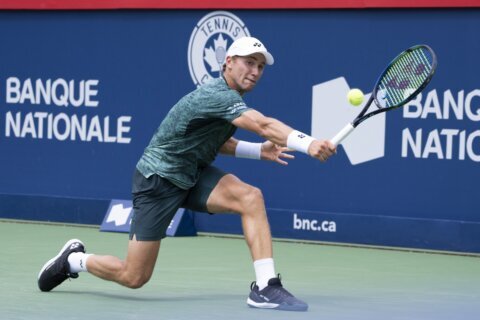