DALLAS (AP) — Amanda Nunes won a unanimous five-round decision over Julianna Peña in the main event of UFC 277 on Saturday night to regain the women’s bantamweight championship that she lost last December.

“Double champ again, baby!” Nunes yelled to the crowd after the fight. “This is the best day ever.”

Peña beat Nunes last December at Las Vegas to claim the title in one of the biggest upsets in UFC history.

Saturday’s fight was the first title defense for Peña (12-5) in the 135-pound division.

Brandon Moreno won the co-main event with a third-round TKO over Kai Kara-France in a scheduled five-round bout to take possession of the interim men’s flyweight championship belt.

Nunes dropped Peña three times in the second round, twice on right hooks and then with a left to the forehead.

Nunes took down Peña midway through the third round and kept her on the mat, punching to the head to open cuts along Peña’s hairline that left blood splattered on the mat.

Nunes had Peña on her back again for much of the fourth and fifth rounds. Peña’s face was streaked with blood that stained much of the mat.

“I could have finished her, but I wanted to go five rounds with her tonight to prove I was better than her,” said Nunes, her right eye swollen nearly shut, using crutches to reach the interview session. “I could have gone six, seven rounds.”

UFC president Dana White said Peña was taken from the arena after the fight to see a plastic surgeon about damage to her forehead.

“Julianna’s tough as nails,” White said. “Her will to win is second to none.”

Nunes owned the bantamweight belt for more than five years before the December defeat, which snapped a 12-match winning streak that included nine consecutive title fights.

Referee Herb Dean stopped the fight between Moreno and Kara-France at 4:34 after Moreno, sporting a deep cut under his right eye with blood streaming down his face and onto his chest, landed a liver kick that dropped Kara-France. Moreno then finished him off.

Moreno (20-6-2), from Tijuana, Mexico, came in as the division’s top-ranked contender and Kara-France (24-10), from New Zealand, was second. Moreno was backed by a crowd that chanted “Mo-re-no!” and “Me-xi-co!” at times during the match.

Deiveson Figueiredo regained the flyweight belt from Moreno last January with a unanimous decision in a trilogy fight in the 125-pound division. But Figueiredo sustained a hand injury several months ago and could not make a title defense, resulting in UFC creating an interim title fight.

After Saturday’s bout, Figueiredo entered the octagon carrying his championship belt and met with Moreno. Figueiredo said he’d like to host Moreno in his native Brazil for the undisputed title.

Moreno said he would have told Figueiredo he didn’t appreciate his coming into the cage but didn’t want to set a bad example for his 8-year-old daughter.

Sergei Pavlovich was awarded a TKO in 55 seconds into a scheduled three-round heavyweight bout against Derrick Lewis, the oldest fighter on the card at 37 years old and a fan favorite from Houston. Pavlovich landed a series of punches to Lewis’ head and upper body. Lewis finally went down but jumped right back up as referee Dan Miragliotta stopped it, as Lewis and the crowd both expressed their displeasure with the ruling.

White said the fight shouldn’t have been stopped.

“Miragliotta made a mistake,” White said. “It happens.”

Alexandre Pantoja quickly finished off Alex Perez on a tap out only 1:31 into their scheduled three-round men’s flyweight matchup. Pantoja (25-5), ranked No. 4, got atop Perez (24-7), No. 6, along the fence and locked his arms across Perez’s jaw to force the submission.

Magomed Ankalaev scored a TKO at 3:09 of the second of three rounds over Anthony Smith in a men’s light heavyweight bout. Ankalaev (18-1), ranked No. 4, took down Smith (36-17), No. 5, in the first round and then pummeled him along the base of the fence early in the second round when referee Jacob Montalvo stopped the fight. Smith injured his left leg and was helped from the cage, but White said there was no fracture. 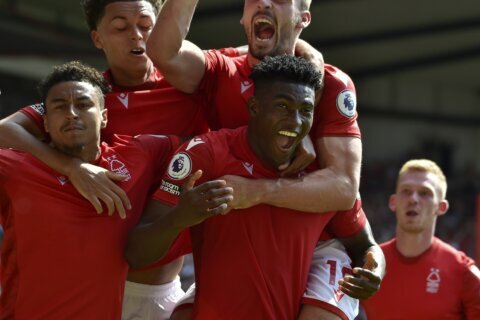 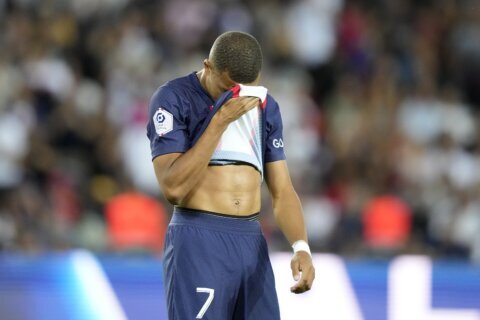