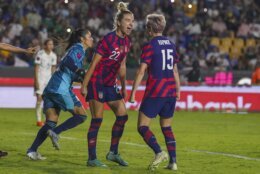 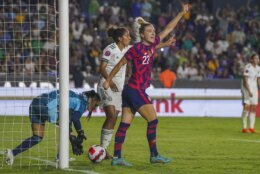 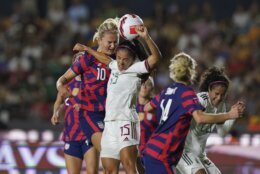 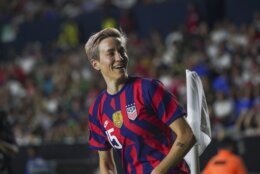 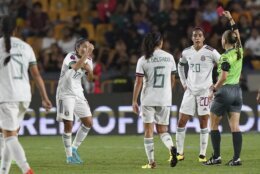 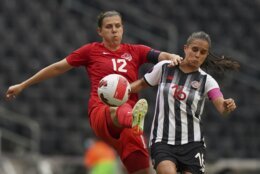 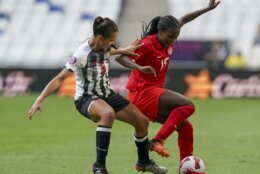 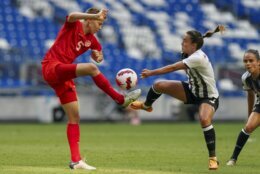 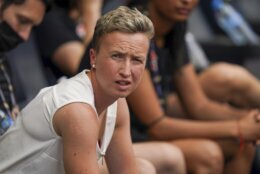 MONTERREY, Mexico (AP) — Kristie Mewis scored in the 89th minute to break a stalemate and the United States beat Mexico 1-0 on Monday night at the CONCACAF W Championship.

The U.S. won Group A in the eight-team tournament and will face Costa Rica in the semifinals. The Americans had already qualified for the 2023 Women’s World Cup as one of the top two teams in their group.

“I think that’s what makes the U.S. really special is that identity of relentlessness, never say die, really will it in,” defender Becky Sauerbrunn said. “Luckily tonight the ball bounced in our favor.”

Mexico’s Lizbeth Ovalle was sent off with a red card for a foul on Rose Lavelle in the 73rd minute. The United States appeared offside on Mewis’ goal, but it was not reviewed.

“I was very happy to see at the end that we still found a way,” U.S. coach Vlatko Andonovski said. “It wasn’t pretty, it wasn’t nice, but in order to win big tournaments, we know that sometimes you just have to find a way, and we were able to do that.”

While Mexico was stout on defense against the top-ranked United States, the hosts were eliminated from qualifying for next summer’s World Cup in Australia and New Zealand.

“If we want to compete on these stages, we have to work in a different way,” Mexico coach Monica Vergara said.

Jamaica beat Haiti 4-0 on Monday night to qualify for its second straight World Cup and advance to a semifinal match against Canada. Bunny Shaw had a pair of goals, and Trudi Carter and Drew Spence also scored for the Reggae Girlz.

Haiti finished third in Group A but will have a chance to make the World Cup when it plays in an intercontinental playoff in February in New Zealand.

The teams at the W Championship participated in a moment of silence for Jedine Carr, a player for Jamaica’s youth national team who was fatally shot on Friday while on the way to training with her club team.

Canada beat Costa Rica 2-0 earlier Monday to win Group B. Both teams had previously qualified for the World Cup as the top two finishers in their group.

Panama beat Trinidad and Tobago 1-0 on Monday to secure third place in Group B and a spot in the intercontinental playoff for another chance to make the World Cup field. Marta Cox scored for Panama just before halftime.

The winner of the eight-team W Championship will earn one of the region’s spots in the 2024 Paris Olympics. Canada won the gold medal at the Tokyo Games.

“We’ve talked about how we’ve got the World Cup, but this Olympics, it means the world to this group, and that’s where we’re heading,” Canada coach Bev Priestman said. “We knew we had to keep our standards high for where we’re going. Overall, I thought it was a professional performance wasn’t perfect, but it was professional.”