BRIGHTON, England (AP) — Beth Mead’s hat trick propelled England to a Women’s European Championship record 8-0 rout of Norway on Monday in a ruthless display that sent the host nation into the quarterfinals with a game to spare.

After the opener from Georgia Stanway’s penalty, there was a double from Ellen White around Lauren Hemp and Alessia Russo also finding the target in front of 28,847 fans in Brighton.

“It’s an incredible feeling to feel as I do now,” Mead said. “An unbelievable night.”

After two straight wins, England completes Group A on Friday against Northern Ireland, which lost to Austria 2-0 in Monday’s other game.

Norway thrashed Northern Ireland 4-1 in its opening game but the two-time European champion was humbled against England even with a team featuring Ada Hegerberg, the all-time leading scorer in the Women’s Champions League.

“Everyone feels devastated,” Norway coach Martin Sjögren said. “I really feel terrible for the players to be out there and lose 8-0 in a game we had been looking forward to for some time. We thought we had a good plan and played well at the start. The last 85 minutes were horrible.”

The size of the result did not reflect the status of the teams in the FIFA rankings with England at No. 8 and Norway at No. 11.

England became the first team to score seven in a European Championship game when Russo headed in from Bronze’s delivery in the 66th.

“We made it a little bit too easy for them,” Sjögren said, “losing the ball in dangerous places. We made some very, very bad mistakes.”

Mead scored twice in four minutes of the first half, and completed the hat trick in the second with a tap-in from close range after Kiera Walsh’s shot was parried.

“What’s going on here? That was going through my mind,” England coach Sarina Wiegman said. “We played well, Norway didn’t have the answers to our game, they didn’t get a press on us and we just worked really well, created chances, scored chances, and it was very enjoyable to watch.”

The sparkling attacking performance was a riposte to doubts over England’s lack of a cutting edge in a 1-0 victory over Austria in the opening game in Group A on Wednesday when Mead also scored. England has a three-point lead over Austria and Norway, while Northern Ireland has no points.

Austria picked up its first win earlier in the day at Southampton’s St. Mary’s stadium.

The opener came in the 19th minute after Sarah Puntigam’s low free kick deflected off the Northern Ireland defensive wall and defender Katharina Schiechtl turned in from close range.

Substitute Katharina Naschenweng burst into the penalty area and fired a low effort underneath goalkeeper Jacqueline Burns in the 88th.

Defender Laura Wienroither was missing for the Austrians due to a positive COVID-19 test.

Another coronavirus case was announced with forward Lea Schüller ruled out of Germany’s game against Spain in Group B in Brentford on Tuesday. The Germans have a strong defence to rely on having been the only side apart from England to keep clean sheets so far.

Germany and Spain opened with wins against Finland and Denmark, who play in Milton Keynes on Tuesday. 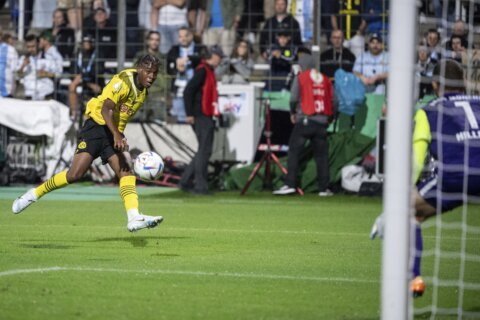