Russian soccer teams were kicked out of the Women's European Championship, the next men's Champions League and qualifying for the 2023 Women's World Cup by UEFA on Monday.
Listen now to WTOP News WTOP.com | Alexa | Google Home | WTOP App | 103.5 FM

GENEVA (AP) — Russian soccer teams were kicked out of the Women’s European Championship, the next men’s Champions League and qualifying for the 2023 Women’s World Cup by UEFA on Monday.

The latest round of sporting sanctions during Russia’s war on Ukraine follow FIFA and UEFA suspending Russian national and club teams in February from playing in international competitions, including the men’s World Cup playoffs.

Those previous decisions — made as countries across Europe refused to play games against Russia — are under appeal at the Court of Arbitration for Sport by the Russian Football Union, and the latest expulsions are also likely to be challenged.

UEFA said Portugal will take Russia’s place in the Women’s Euro 2022 being hosted by England in July. Russia qualified by beating Portugal in the playoffs round.

Russian Premier League winner Zenit St. Petersburg’s place in the next Champions League group stage will go instead to the champion of Scotland, according to UEFA’s updated list of allocated entries.

A Champions League place is worth tens of millions of euros (dollars) in UEFA prize money to Zenit, which is owned by Russian state energy firm Gazprom. UEFA has also terminated sponsor deals with Gazprom and moved this season’s Champions League final from Zenit’s home stadium to Paris.

Russia also will not have entries in next season’s Europa League and Europa Conference League. Clubs likely to miss out include Dynamo Moscow, Sochi and CSKA Moscow.

UEFA said its executive committee took the latest decisions for its competitions to “ensure their smooth staging in a safe and secure environment for all those concerned.”

At interim appeal hearings at CAS in March, lawyers for UEFA and FIFA cited their duty to organize efficient competitions as justification for suspending Russian teams rather than argue for an obligation to uphold human rights.

Russia’s bids to host the men’s Euros in 2028 or 2032 – both launched in March since the war started — were also terminated, with UEFA ruling them ineligible on Monday.

Russia will also not play in its second-tier group of the men’s Nations League and will be automatically relegated, UEFA said. Scheduled opponents in June and September were Iceland, Israel and Albania.

Soccer in Ukraine was suspended when the war started on Feb. 24. Its top clubs, Shakhtar Donetsk and Dynamo Kyiv, are touring Europe playing charity games and the national team will resume its own delayed World Cup qualifying program in June.

Ukraine will play at Scotland on June 1. The winner advances to play Wales in Cardiff four days later with a place at the World Cup in Qatar at stake. 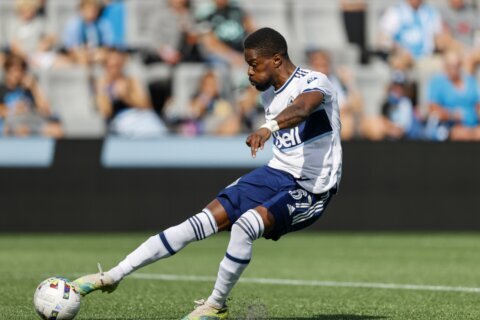