Quadruple-chasing Liverpool turns its attention back to the pursuit of the Premier League title against Tottenham after reaching the Champions League final. Before playing Real Madrid in Paris on May 28, Liverpool could add the FA Cup and Premier League title, having already collected the League Cup. Liverpool trails Manchester City by one point so is relying on its opponent slipping up in the remaining four games while winning itself. City, whose European hopes were ended by Real Madrid on Wednesday, isn’t in action until Sunday against Newcastle. Liverpool forward Roberto Firmino could miss the visit of Tottenham and be held back for Tuesday’s trip to Aston Villa. The Brazil international is back in full training after a five-match absence due to a foot problem. Defender Joel Matip and midfielder Jordan Henderson could return, having been rested for the win at Villarreal on Tuesday. Winning is a priority for Tottenham to try to close the two-point gap on fourth-placed Arsenal to qualify for the Champions League next season. Third-placed Chelsea, which was beaten by Everton last weekend, hosts Wolverhampton. Manchester United, which is three points behind Tottenham having played two games more, is at Brighton. At the other ends of the standings, Watford will be relegated unless Roy Hodgson’s side beats his former club, Crystal Palace. Burnley hosts Aston Villa looking to pull further clear from danger by continuing its resurgence since firing manager Sean Dyche. Three wins and a draw under caretaker manager Mike Jackson have taken Burnley two points above Everton, which occupies the last relegation place with a game in hand. Brentford and Southampton, who are both eight points above the drop zone, meet in west London.

Nantes faces Nice in the French Cup final at Stade de France with the winner earning a place in the Europa League. Both sides are looking to win the competition for the fourth time. It will be one of the last games in the yellow jersey of Nantes for striker Randal Kolo Muani before joining German club Eintracht Frankfurt next season. He aims to add to his 13 goals this season and help Les Canaries (The Canaries) win the competition for the first time since 2000. Nice will look to strikers Andy Delort, Amine Gouiri and Kasper Dolberg to give Nice its first French Cup since 1997. The only league game sees sixth-placed Strasbourg visit mid-table Brest. Strasbourg is in outside contention for fourth spot and automatic entry into the Europa League.

Barcelona visits Real Betis with both sides vying to lock up a Champions League berth that goes to the top four finishers in La Liga. Barcelona is in much better position in second place with four games remaining. Betis is in fifth place and needs to overhaul the three points that separate it from Atlético Madrid in fourth. A win by Betis would put more pressure on Atlético before it faces champion Real Madrid in a derby on Sunday. Barcelona will be without injured defender Gerard Pique, while goalkeeper Marc-Andre ter Stegen is doubtful due to a stomach illness. Betis has already locked up at least a Europa League berth for next season as a prize for having won the Copa del Rey. Elsewhere, Granada visits Mallorca needing a win to escape the relegation zone. Mallorca is only one point clear of danger along with Cádiz before the Andalusian side hosts Elche. Athletic Bilbao also welcomes Valencia still holding slim hopes to enter European competition.

Napoli ended a miserable run in style by beating Sassuolo 6-1 last weekend and it will hope to pick up where it left off at Torino. Two defeats and a draw in its previous three matches ended Napoli’s title chances but it still hopes to finish third, above Juventus. Lazio will be looking to boost its chances of qualifying for Europe when it hosts a Sampdoria side still not mathematically safe from relegation. Also, Sassuolo faces Udinese.

Bayer Leverkusen can secure its place in the Champions League with a win at Hoffenheim in the Bundesliga. Other teams are also scrapping for European qualification. If Freiburg loses at home to Union Berlin, which is eyeing the Europa League, a draw would be enough for Leverkusen. With the top seven positions guaranteeing international soccer next season, Union can secure its return to at least the Europa Conference League with a win in Freiburg. But Freiburg will be looking for a win to consolidate the fourth and final Champions League place ahead of Leipzig, which doesn’t play till Sunday. Sixth-placed Cologne needs only a point against visiting Wolfsburg to be sure of European football. If Hoffenheim fails to beat Leverkusen, both Union and Cologne will be through irrespective of their results. Hertha Berlin can secure its Bundesliga survival with a win over Mainz in the late game. A draw might even be enough depending on Arminia Bielefeld’s result in Bochum the night before. 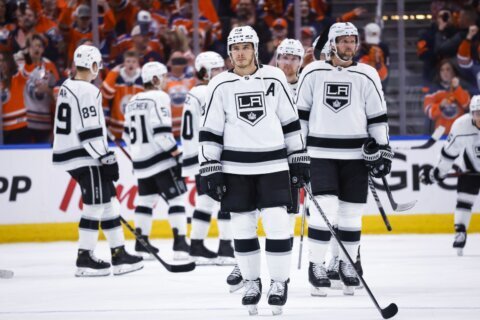